Wat-aah!, a New York-based bottled water brand for kids, and its Founder and Chief Executive Officer Rose Cameron announce “Taking Back the Streets,” a national art campaign developed to further support the goal of Drink Up, an initiative of the Partnership for a Healthier America (PHA) and its honorary chair first lady Michelle Obama that encourages Americans to drink more water more often.

“Taking Back the Streets” intends to reclaim the space where kids live by replacing other media on the streets with messages about healthy hydration, the brand says. The most powerful messages that connect to kids and teens are not only found in magazines or on TV but also in the streets, it adds. For this reason, Wat-aah! is harnessing the power of street art to reach its target demographic. As part of this program, leading street artists will work to change the way kids think about water and hydration.

The program will kick off with a star-studded, invitation-only art exhibition Feb. 20 at the New Museum in New York City. The exhibit will display the work of 14 artists including Kenny Scharf, Shepard Fairey, Swoon, Shantell Mar 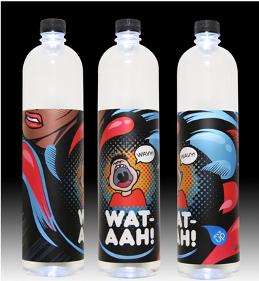 tin, Trey Speegle, Lichiban, Concep, Metro Zu and others. Scharf and Haring will receive a special tribute in honor of their efforts in engaging youth with the arts.

Each participating artist will showcase an original piece of artwork inspired by Wat-aah!'s screaming boy logo and Drink Up's water drop logo and/or one that communicates water in general. These pieces will be transformed into label art for Wat-aah!’s new limited-edition series of bottled waters. The limited-edition series will be part of a yearlong exhibition that will visit New York City; Washington, D.C.; Philadelphia; Los Angeles; Miami; and other cities. Street murals tagged by various artists involved in the project also are expected to pop up around the city in the days leading up to the event. A mural by artist Metro Zu currently appears in SoHo on Lafayette and Jersey streets.

In New York City, Wat-aah!'s “Taking Back the Streets” campaign will continue with a pop-up exhibit for the general public from Feb. 22 through March 1 at WallPlay. The exhibit can be viewed from 11 a.m. to 7 p.m. seven days a week.