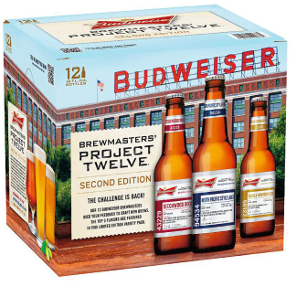 Anheuser-Busch, the St. Louis-based subsidiary of Anheuser-Busch InBev, is bringing back Budweiser Brewmasters’ Project Twelve on Oct. 28. Last year, the Project Twelve program resulted in the launch of Budweiser Black Crown, which was originally known as Batch 91406. This year, the second-edition multi-pack will include three new beers named for the zip codes in which the beers were brewed.

Each of the beers is made by a Budweiser brewmaster and features the brand’s signature yeast strain that was first used by Adolphus Busch in 1876. This year’s three new small-batch beers are: Batch 94534, a lager made with a blend of North Pacific hop varieties, including Cascade and Palisade, in Fairfield, Calif.; Batch 23185, a light amber lager brewed in Williamsburg, Va., and aged on a bed of bourbon barrel staves and vanilla beans; and Batch 43229, a deep amber lager brewed in Columbus, Ohio, with chocolate and caramel malts and finished on Beechwood chips.

"Our brewmasters are the best in the business, and the quality of our brewing standards is unmatched," said Brian Perkins, vice president of Budweiser, in a statement. "Project Twelve showcases our brewmasters at the top of their game, challenging them to create new recipes that stay true to the Budweiser taste profile while also introducing unique, new flavors."

At the Budweiser Made in America Music Festival during Labor Day weekend, adults of legal drinking age had a chance to sample and provide feedback about the new Project Twelve beers.

"The initial response from beer drinkers has been overwhelmingly positive," said Pete Kraemer, head brewmaster at Anheuser-Busch, in a statement. "Each of the three beers has a distinct taste with a common thread. Project Twelve is all about showcasing brewing creativity and credentials and making beer drinkers happy. We are confident we've achieved that with the 2013 edition."