At the 10th anniversary of its Innovation Roadshow, team members of Philadelphia-based David Michael & Co. took the company’s flavor innovations on the road to 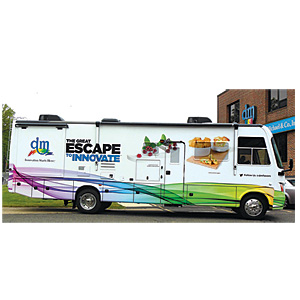 share with clients, educational institutions and media across the country. Starting Labor Day weekend, The Great Escape to Innovation RV began its two-month tour of the Midwest, highlighting its latest creations in order to showcase its focus on innovation. The team also toured the Northeast this summer and plans to tour the Southeast in early 2014.

The David Michael team also discussed some flavor trends that inspired other innovations. For example, the team developed ginger-flavored bourbon in line with the ginger flavor trend in the beverage industry, the company explains. Taking a page from the craft beer brewing book, the company also designed a mango-flavored pale ale. To offer a different source of protein, David Michael created a Peach Orange Pea Protein Smoothie that incorporates Natural Peach Orange Flavor WONF with pea protein, an easily digestible, low-allergen protein alternative, it adds. Finally, in an effort to incorporate tastes from around the globe, the company mixed a Mezcal torito, which augmented a traditional torito, which normally features rum, milk and fruit flavors, with the Mexican liquor Mezcal and flavors such as peanut and chocolate fudge, spiced horchata, lavender and honey, and bitter herbal tea for four different variations, the company says.

Mycotoxins in Food and Beverages: Innovations and Advances Part I

Mycotoxins in Food and Beverages Innovations and Advances, Part II