More than 55 percent of the world population is suffering from some type of anxiety, stress or sleep disorder, according to Statesville, N.C.-based Bebida 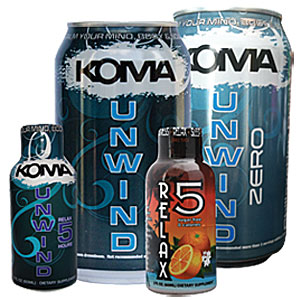 Beverage Co. (BeBevCo). Based on this, it’s pretty clear why the relaxation drink segment is becoming more saturated. Now, an increasing number of consumers seem to be identifying BeBevCo’s relaxation brands as a solution to their ailments.

Year-to-date, BeBevCo reported a 56 percent increase in revenue compared with the corresponding first half of 2012. During the second quarter, it increased 61 percent compared with the same quarter in 2012, reaching nearly $2 million in reported revenues. Although the company also manufactures Potencia energy drinks, Potencia Blast energy shots and Piranha Water, it attributes its growth to its flagship relaxation brand, KOMA Unwind.

“With the launch and success of the KOMA Unwind brand, we have an opportunity to be the category leader, and that’s within the grasp of a whole other world, so for us, we’re really putting all our eggs in that basket,” he says.

In three years, the brand went from producing thousands of cases to tens of thousands of cases, in large part to its growing partnership with Walmart, Weber says. To build upon this success, the company plans to launch a new Retreat Kola flavor under its KOMA Unwind relaxation drink brand during the first quarter of 2014. As a result, he expects volume to increase to tens of millions of cases in 2014 and beyond.

“We’re in a position now where growth is going to go faster, and it is literally a snowball, and it’s going quicker and quicker,” Weber says.

Two brands are better than one

Despite already having a presence in the relaxation shot segment, in late 2011, BeBevCo released Relax 5, a new relaxation dietary supplement shot. Featuring an orange flavor and supplement blend including melatonin, Relax 5 was created to enhance the company’s positioning at retail. Essentially, it helps to fill out a three-tier “Relaxation Station” display full of Relax 5 and KOMA Unwind relaxation dietary supplement shots and drinks at the point-of-sale so that no matter which relaxation product shoppers select, it is a BeBevCo product, Weber explains.

To help increase consumer awareness of its products, BeBevCo takes part in marketing activations across the country. Because Weber used to compete in NASCAR races part time, many of the company partnerships involve NASCAR; however, it aims to resonate with fans of every interest through various activations in order to encourage sampling and purchase, he says. One of the things that separates KOMA Unwind from its competitors is its wide consumer base, he adds. In August, the KOMA Unwind team with 25 people gave away 25,000 cans in two days to New Yorkers working in the financial district and other locations in the Manhattan area. They also donated 400 cases of KOMA Unwind to the local homeless shelters. Also, in 2011, it appeared in the music video for Jennifer Lopez’s single “I’m Into You,” which received more than 146 million views, it says.

Looking beyond the United States, BeBevCo Euro-Asia was formed in 2013 under the leadership of Ahmed Elafifi, former president of Red Bull Eastern Europe and chairman and managing director of Coca-Cola Hellenic in Poland, to expand its relaxation products overseas. It recently added Alexander Khomenko, the former manager of Red Bull GmbH, and Serkan Barutcu, the former director of operations for Monster Beverage Corp., to its Euro-Asia team to help do so.

Getting consumers to chill out