Shortly after the launch of Essentia fortified water in 1998, President and Chief Executive Officer Ken Uptain realized that the consumer market was not ready for it. 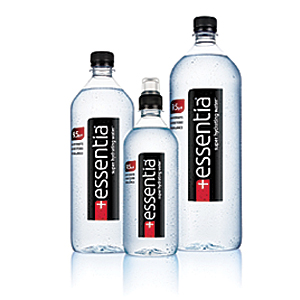 “After about a year, I realized that this product was way ahead of its time,” he says. “It was non-source-dependent water; basically it was municipal water. It had all of these health benefits, but 99 percent of the water being sold in the country was all sourced waters … and the consumers just basically weren’t getting what we were trying to sell them.”

From about 1999 to 2008, Uptain let the Bothell, Wash.-based company “incubate” and took orders, worked on customer service, and worked to gain endorsements from the medical community until he thought the market was ready for the relaunch of Essentia.

“In 2008, I could tell that the market was really ready for the brand,” Uptain says. “Orders were coming in, phones were ringing, I had to hire a couple of staff people, and I decided to … start building the brand.

“Since 2008 until now, we are the No. 1 brand sold in the natural segment of the country, and we are one of the Top 10 fastest-growing brands in grocery,” Uptain continues, citing data from SPINS, Schaumburg, Ill. The brand has grown by more than 50 percent in each of the last three years, has achieved 50 percent growth year-to-date this year, and expects similar growth next year, Uptain says.

Much of the brand’s growth has been triggered by a consumer market shift toward healthier beverages, Uptain notes. As lifestyle trends have shifted toward healthier consumption, consumers have become more interested in the benefits Essentia offers beyond regular water, and sales have boomed, he says.

“In the last six to eight months, we really have had much new distribution come online, [and] we have a lot coming online soon,” he says.  The brand currently is available nationwide in natural food stores like Whole Foods Market, Sprouts and Vitamin Cottage; in grocery retailers including Publix, Safeway, Stop & Shop, Kroger, Albertsons, HEB, and Raley’s, among others; and on amazon.com as well as Essentia’s website.

What makes Essentia water unique is its ability to offer instant hydration because of its restructured water clusters, the company says.

“Our process is pretty simple,” Uptain explains. “We take purified water — so we clean it completely — and then we add minerals [and] electrolytes to the water, and then we go through our technology, which really separates the ions from the water. We remove the acidic ions and bottle the alkaline ions to get [the water] to 9.5 pH. In that process, we actually charge these ions, and when you drink the product, it permeates your body instantly, so when you drink it, you hydrate instantly.”

Most bottled waters have a neutral pH factor of 7.0, according to the brand. At the same time, most bodies are acidic, due to factors like stress, diet and environmental factors, it says. Over time, a high level of acid can result in a loss of bone density and muscle mass and can negatively impact critical organs like the kidneys, it says.

Drinking a basic or alkaline beverage like Essentia water can help to neutralize these acidic conditions inside the body and restore it to a more balanced state, according to the brand. The purified process also can have a positive effect on the taste of the product.

“Also, what happens is because we remove the bitter-tasting acidic ions, the product tastes very smooth to the palate, [making it] very easy to drink,” Uptain adds. “And when you drink it, you get instantly hydrated, so you feel better.”

Water for the masses

Essentia has found that the best way to communicate its health benefits to consumers is through sampling, Uptain says. “Our goal is just to get the product in the hands of consumers nationally,” Uptain says. Once consumers experience the brand for themselves, they tend to be very loyal to the functional water, he notes.

The company’s latest data shows that many of its consumers buy four bottles or more at a time, consuming them every day in the office, at home, and in the car, he says. The brand’s 1.5-liter bottle accounts for 60 percent of its sales, because it offers the best value per ounce, he adds.

With consumers buying high quantities of the water at once, out-of-stocks happen pretty quickly in stores, Uptain says. In an effort to offer consumers more convenience and value and to skirt this out-of-stock issue, the company launched six-packs of 20-ounce and 1-liter single-serve bottles in March, the company says.

To keep up with other market trends, the brand also tweaked its label in June 2012. Essentia chose to stick with its signature black color, incorporating it behind the brand name on the label. The rest of the label is clear with black writing to give the product a more modern look, Uptain says. The bottle’s shape is designed to look slightly medicinal, showing consumers that Essentia can offer more than a regular bottled water, he adds.

Essentia makes a splash in marketing

This summer, Essentia launched its Super Summer Hydration Giveaway. In partnership with JetFlow, a West Jordan, Utah-based maker of hydration packs compatible with bottled water, the brand gave away a hydration kit each day from June 21 through Aug. 9. Consumers were invited to share a paragraph or photo about their favorite way to stay hydrated to the brand’s Facebook page, and one entrant chosen at random each day was awarded a case of Essentia water, a JetFlow Tomahawk hydration pack, and a workout DVD from fitness experts The Healthy Housewives. All entrants received an Essentia coupon for redemption at a local retailer.

“We’re trying to bring [the brand] to life and help educate consumers around the hydration benefits of Essentia, to get them to try the product, and we wanted to do something that would be engaging and motivating around the theme and bring it to life for the summer season,” says Paul Curhan, marketing consultant for the brand.

The promotion, which was marketed online and on in-store bottleneck hangers, drew a lot of consumer interest in the brand’s Facebook page, Curhan adds. The brand started using the social media platform in the last few months and is working to build its social community, he explains. “We have tens of thousands of loyal Essentia consumers across the country … and we’ve never really had an opportunity to engage with them, so we’re really trying to leverage our social platforms to engage with our core consumer and obviously help build the brand as well,” he says.

“We are focused on building, for the first time, our social platform but in a more methodical, grassroots way,” Curhan says.  “We’re investing in it appropriately, I think. We’re not trying to buy our way into it; we’re trying to grow our presence organically and reach our core consumers who we have not really engaged with. … Our consumers are online, they’re seeking information online, but we’ve never really engaged with them in a proactive way, and now we’re trying to do that.”

The Super Summer Hydration Giveaway also marks the brand’s first official partnership with The Healthy Housewives. The healthy lifestyle company discovered and became interested in Essentia on its own and is now one of Essentia’s strongest evangelists online by promoting it on their Facebook page and media properties. Essentia took note of their fandom and in the last few months decided to work more formally with The Healthy Housewives as a partner in the summer promotion.

Although the duo does not have any upcoming promotions planned, Curhan says Essentia hopes to work with The Healthy Housewives more as it expands their media property and reach.

Essentia Water’s Stop for Nothing campaign promotes sense of renewal

Coconut water finds a home in the beverage market