Universal Music Canada and Crystal Head Vodka, the ultra-premium vodka founded by Dan Aykroyd, have joined forces with The Rolling Stones to create an 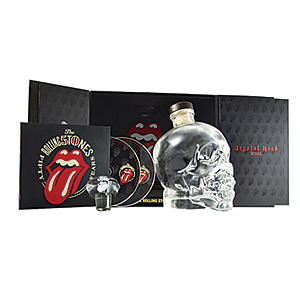 exclusive, limited-edition Rolling Stones 50th anniversary gift set. “It is a huge honor and recognition of our high-quality product to have Crystal Head designated as the officially authorized vodka for the Rolling Stones 50th anniversary worldwide celebration,” Aykroyd said in a statement. “Together with Bravado, the band’s licensing company, we have created the ultimate gift package for Stones fans and their families. There has never been a greater Father’s Day gift, Halloween decoration or Christmas present. Anybody who loves the Stones or great vodka — and pretty much everyone I know loves both — will be all over this.” The following are included in the set: a handcrafted display case featuring a real zipper in recognition of the “Sticky Fingers” album cover; a two-disc CD compilation of live Rolling Stones hits; a crystal bottle decanter with The Rolling Stones iconic lip-and-tongue logo engraved at the top; and a bottle tattoo featuring the 50th anniversary logo.