Budweiser tops its new can with a bow 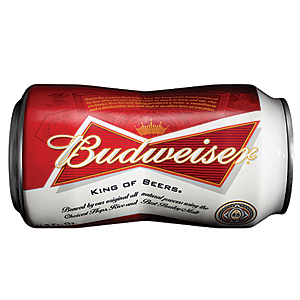 available in eight-packs on store shelves nationwide. “This can is incomparable, like nothing you’ve ever seen before,” said Pat McGauley, vice president of innovation for Anheuser-Busch, in a statement. “The world’s most iconic beer brand deserves the world’s most unique and innovative can. I think we have it here.” The proprietary can, in development since 2010, is available only in the United States and will not replace the traditional Budweiser can, the company says. To make the new can possible, Anheuser-Busch engineers needed to solve a number of technical challenges, and major equipment investments were required at Budweiser’s can-making facility in Newburgh, N.Y. Significant capital investments also were required to upgrade packaging lines at the Budweiser breweries in Los Angeles and Williamsburg, Va. — the first breweries with the capability to package this unique can innovation. An initial run of more than 10 million bowtie cans were produced in Newburgh through March 31 for the spring introduction. An additional 8 million cans were scheduled to be produced in April. Due to the can’s slimmer middle and sleek design, it holds 11.3 ounces of beer with 137 calories, approximately 8.5 fewer calories than a traditional 12-ounce can of Budweiser. The launch of the can is being supported with a marketing campaign that includes digital, print and TV advertising. It is available in grocery stores, super- markets, convenience stores and liquor stores.