Up Close With: Revolution Brewing

Company plans to be Chicago’s No. 1 craft brewery

With a title like chairman of the party, Josh Deth of Revolution Brewing has a tall order to fill. The Chicago-based craft brewery went from operating solely as a 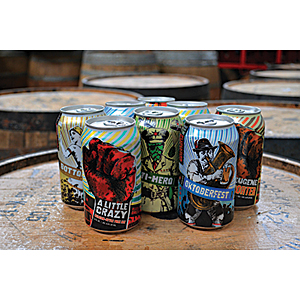 brewpub to opening a brewery for its consumer packaged goods (CPG) business last spring, but the idea of Revolution Brewing began much earlier than that.

Starting out as a novice home brewer, Deth got his start in the beer industry by cleaning kegs for a small brewery in Chicago that is no longer in operation, he says. After that, he got a job at Goose Island Beer Co., which now is owned by Anheuser-Busch InBev, Leuven, Belgium. During his time at Goose Island, Deth thought of the name Revolution for his own craft brewery that he hoped to open one day.

“I developed that when I was working at Goose Island in 2000/2001, and I left thinking I was going to open my own brewery, but it didn’t work out for a while,” he says.

Still wanting to be a part of the beer industry, Deth and some friends opened Handlebar Bar & Grill in 2003, but later he got that “bug” to give Revolution a try, so he sold his share of the business and opened the brewpub in 2010. Deth stuck with the name Revolution as a testament to his history of community activism and to the changing U.S. beer market.

“It’s also a tribute to what’s going on in beer,” he says. “It’s been nothing short of a revolution when it comes to taste and flavor. It’s also a revolution in the way that people have flocked to these crazy beers, so it’s changing the map of beer in America, and it’s a wonderful thing.”

Although Revolution Brewing opened the brewpub in 2010, the company didn’t open the brewery for its canning and bottling business until last year. Operating out of a 40,000-square-foot facility in Chicago, the CPG business makes up approximately 50 percent of the company’s overall sales, Deth explains.

“We’re about 50/50 between draft and packaged goods, and that’s a nice, healthy percentage to focus on both,” he says. “Chicago is a big draft beer market — lots of bars and restaurants here — and we like that. For a brewer, that’s a positive thing.”

Producing more than 50 different styles of beer each year, the brew-pub’s offerings include barrel-aged beers, session styles and more, the company says. And by opening a brewery for CPG production, the brewpub has more opportunities to offer an even greater variety of beers, Deth explains.

“One of the fun things that we’re going to be doing is more lager brewing,” he says. “We like brewing lagers, but we haven’t had the capacity because the brewing takes longer, and now with the new brewery, we have more brewing capacity.”

That brewing capacity has lent itself to a burgeoning CPG business. With the packaged goods division already making up 50 percent of its business, Revolution Brewing is looking to become Chicago’s No. 1 craft brewer, Deth says. Although the company didn’t originally set out to do this, the timing of its brewery opening has been beneficial, he adds.

“It’s just been a great time,” Deth says. “There weren’t a lot of other breweries in the city. A lot of brewers around the country send their beer to Chicago and sell it. It’s a great market for beer, but overall [consumers] want more local, and we fill that need and have fun [with] the brand and different kinds of beers.”

Another interesting aspect of Revolution Brewing’s business model is that, of its CPG products, approximately 80 percent are packaged in 12-ounce cans, which the company sources from Crown Holdings Inc., Philadelphia. In Beverage Industry’s December 2012 article about the craft brewing industry, Andrea Riberi, senior vice president of the professional services group for New York-based Nielsen, said that canned beer sales account for only 3.5 percent of case sales for the craft beer segment.

For the design of its cans, Revolution Brewing wanted a product that communicated its identity by building off of its fist logo. Beginning this spring, the company will have a seasonal can for the four seasons: A Little Crazy, a Belgian-style pale ale for spring; Rosa, a hibiscus ale summer offering; Oktoberfest, a German-style beer for fall; and Fistmas, a holiday ale that features red ale brewed with ginger root and orange peel.

“Seasonals can really be a huge part of your business, and Oktoberfest is a great example for us,” Deth says. “We are doubling production on how much Oktoberfest we did last year.”

As Revolution Brewing looks to build off of its growing presence in the Chicagoland area as well as its CPG distribution in Ohio, the company has some big plans on the horizon. Deth says the company is already looking to add 30,000 square feet to its current facility, which would include a kitchen, more tanks, more barrels for its barrel-aged beers, and a dedicated aging cellar in order to protect the product from the elements.

The company also announced in March that it will expand its tank farm to double production capacity to 35,000 barrels a year.

Up Close With... Pike Brewing Co.

Up Close With: Belvedere Vodka

Up Close With Neuro Drinks

Up Close With... Grown-up Soda