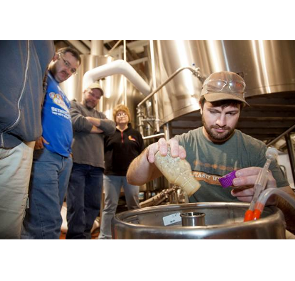 The Oskar Blues Brew School, Brevard, N.C., announced that its first 20 students are preparing to take the General International Beer and Distribution Certification exam in a few weeks. One of those students has already been offered, and accepted, the position of assistant brewer at Oskar Blues’ North Carolina brewery.

“I could not be happier,” said new brewer Erik Weber in a statement. “This class was key to my access to the amazing people in the craft beer industry, and this is a great opportunity for me to grow with Oskar Blues.”

“We are thrilled to have found a brewer from the class,” said Noah Tuttle, head brewer at the Brevard brewery, in a statement. “This goes to show how important education and hands-on training is for folks who want to pursue careers in this incredibly fast-growing industry.”
The course is a collaboration between Oskar Blues Brewery and Blue Ridge Community College (BRCC), which has a campus nearby. Students have alternated between lecture classes at the college and hands-on learning at the brewery since January. BRCC also offers additional Craft Beer Academy classes. Two other recent Oskar Blues hires, Amy Rubin, western North Carolina sales representative, and Travis Mannon, a packaging employee, are graduates of BRCC’s Beer Basics class.
“The Brew School has been extremely well received with an enormous backlog of interest,” said Ben Kish, workforce training development director at BRCC, in a statement. “We had so many students enrolling [that] we nearly overloaded our registration system. One of the most encouraging points is we are already seeing students being placed in the industry from our program.”

Registration for the Oskar Blues Brew School summer session will be online with dates and times to be announced later this month. The summer schedule for BRCC will be available online soon with the Oskar Blues Summer Brew School and all Craft Beer Academy classes listed.