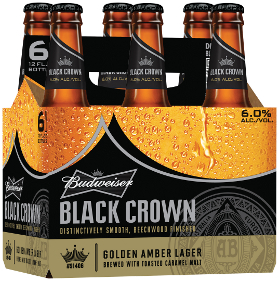 Anheuser-Busch, a subsidiary of Anheuser-Busch InBev, announced the winning beer of its Project 12 initiative: Budweiser Black Crown, brewed by Los Angeles brewmaster Bryan Sullivan. The beer blends two-row caramel malt with four types of domestic hops as well as the brand’s original and proprietary yeast. Featuring more body, color and hop character than the flagship lager, it also has a slightly higher alcohol content at 6 percent alcohol by volume, the company says. The beer is sold on- and off-premise in 12-ounce glass bottles available in six- and 12-packs and in 22-ounce single bottles. It is priced at parity with Bud Light Platinum and Michelob Ultra.