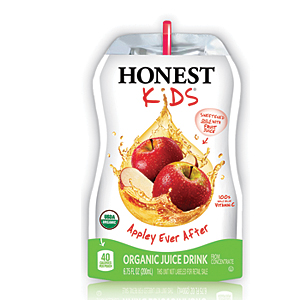 photography that emphasizes the flavors in each variety. The updated look aligns the appearance of Honest Kids with the clean, simple look of Honest Tea and Honest Ade. The company also announced the release of a 59-ounce multi-serve bottle for three Honest Kids varieties: Berry Berry Good Lemonade, Super Fruit Punch and Goodness Grape. The new bottle, with an easy-to-pour grip and the words “Honest” and “Organic” embossed on the neck, is designed for at-home consumption, it says. In addition to its packaging changes, the Honest Kids line has been reformulated to be fruit-juice-sweetened beverages. The organic cane sugar has been removed from all varieties, and the juices are now sweetened with additional juice content, according to the company. Honest Kids beverages now have between 30 and 42 percent juice, depending on the variety. Nutritionally, the drinks remain at 40 calories for each 6.75-ounce pouch. Cartons of the eight-packs of pouches and the multi-serve bottle made their debut in natural food stores in October and will be in grocery stores nationwide starting in January 2013.