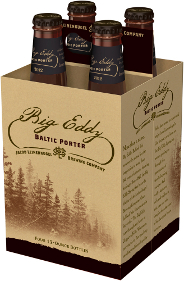 Jacob Leinenkugel Brewing Co., a division of MillerCoors’ Tenth and Blake Brewing Co., introduced the third in a series of Big Eddy brews. Big Eddy Baltic Porter blends seven malts, including Munich, crystal rye, roasted barley, Special B, chocolate malt and a blend of pale malts. At 8.5 percent alcohol by volume, the beer features flavors of toffee, cocoa, caramel, toasted bread and sherry fruit, the company says. Influenced by the cultures and techniques from the Baltic region in the late 1700s, Big Eddy Baltic Porter takes notes from the porters, stouts and Russian Imperial Stouts being shipped throughout the Baltic region from the United Kingdom and applies lager brewing techniques learned from Bavarian brewers, it adds. The beer is available for a limited time in four-packs for $10.99 and on draft.