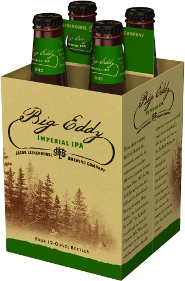 Jacob Leinenkugel Brewing Co., a division of MillerCoors’ Tenth and Blake Brewing Co., launched Big Eddy Imperial IPA, the second in a series of Big Eddy brews rolling out this year. The limited-release beer features Warrior, Cascade, Simcoe, Citra and Amarillo hops from the Pacific Northwest as well as notes of grapefruit, mandarin orange and mango balanced by pine, caramel and toffee flavors, the company says. Big Eddy Imperial IPA has 9 percent alcohol by volume and 78 international bitterness units. It is available in select markets on draft and in four-packs of 12-ounce bottles for $10.