Oskar Blues Brewery expanded the availability of its home-brewed root beer from its restaurants by bottling it in Alumi-Tek bottles from Ball Corp. The bottled root 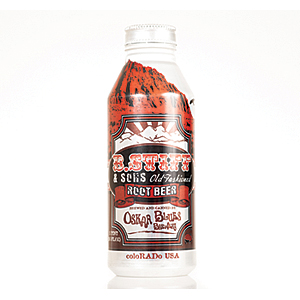 beer was named after Brian Stiff, a part of the local Lyons, Colo., bicycle scene and father of two who recently and unexpectedly passed away. Founder of Oskar Blues Dale Katechis named the packaged variety B. Stiff & Sons Old Fashioned Root Beer as a tribute to his friend and to help Stiff’s wife, the company says. A portion of the proceeds from each bottle of root beer sold will be donated to the Stiff family, it notes. In addition, Ball Corp. received the Grand Award and Best of Category Award for Two-Piece Cans from the International Metal Decorator Association (IMDA) for Sierra Nevada’s Pale Ale in 12-ounce cans. The cans use Ball’s Eyeris printing technique to reproduce Sierra Nevada’s mountain vista image. The IMDA also honored Ball’s 16-ounce New Belgium Brewing Fat Tire Amber Ale can with its Award for Excellence for Two-Piece Cans. The 16-ounce Fat Tire cans also use Eyeris to showcase the brewery’s bicycle icon.