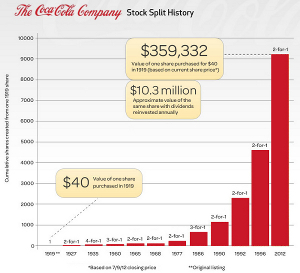 The shareowners of The Coca-Cola Co., Atlanta, approved a two-for-one stock split and an increase from 5.6 billion to 11.2 billion authorized shares of the company’s common stock, the company reported.

The record date for the stock split is expected to be July 27 with new shares expected to be distributed on or around Aug. 10, the company says. Each shareowner of record on the close of business on the record date will receive one additional share of common stock for each share held, it adds.

This is the 11th split in the stock’s 92-year history and the first in 16 years. The Coca-Cola Co.’s common stock began trading in 1919. Since its original listing, the stock previously split 10 times — first in 1927 and most recently in 1996. With all dividends reinvested annually, one share of common stock purchased for $40 in 1919 would be worth approximately $10.3 million today.

For more information about the stock split, visit www.thecoca-colacompany.com/investors.