Stevia-sweetened CSD expands its consumer base

Growing up, Paddy Spence, chief executive officer of Zevia, loved carbonated soft drinks (CSDs). But about 12 years ago, Spence and his wife made a conscious 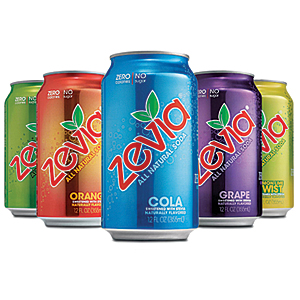 “I had thought I was a health-conscious person,” he says. “I worked out a lot, I ate primarily organic foods, tried to eat a lot of fruits and vegetables, and yet when I actually stepped back and looked at my diet, I was consuming almost 200 grams of sugar a day.”

As Spence began to look for natural sugar alternatives, he became interested in stevia, which had been traditionally sold in the United States as a dietary supplement, he says. In 2008, the U.S. Food and Drug Administration approved the use of stevia as a sweetener.

“When I found Zevia on the shelf in a retail store, I said, ‘Wow, this is a product that not only is fascinating from a business perspective, but really appeals to me as a consumer,’” he says. “This is an item that can actually bring me back to the soda category — a category I loved as a kid but haven’t consumed for years.”

“One of the fascinating things about this product is we’re competing in a category that virtually every consumer purchases; I think it’s 96 percent of American households purchase CSDs,” he says.

Spence predicts that the category’s household penetration will help grow the Zevia brand.

“When we bought the company and we were stepping back and looking at what’s the opportunity and how do we maximize that opportunity, I think it was very clear to us that we had a better mouse trap,” he says. “It was simply being able to educate consumers and the trade on how this product was different, and yet very similar to its legacy soda cousins.”

Because it uses stevia as its sweetener, Zevia has found early success within the natural products channel as well as in local and regional chains and independent retail stores. Spence adds that within the natural channel, Zevia typically is one of the best-selling products in a store. In some retailers, the zero-calorie CSD is in the Top 20 products across all staple beverages, he says. In 2011, Zevia started to add distribution in conventional grocery retailers.

“When we bought the company [20] months ago, the initial goal was to be the No. 1 brand within the natural segment of CSDs,” Spence says. “We very quickly achieved that in natural products stores like Whole Foods, Sprouts as well as local and regional chains and independents.”

The company set a subsequent goal to surpass the zero-calorie offerings from a class of specialty brands, including Dr Pepper Snapple Group brands IBC and Stewart’s Fountain Classics, he adds.

“We very quickly became the No. 1 zero-calorie offering in that segment surpassing Diet Hansen’s,” Spence explains. “So now we’re starting to look further out.”

Spence says he sees potential for the brand to impact the CSD category long-term because of Zevia’s high velocity and profit margin for retailers.

In addition to the natural channel consumer, Zevia also has seen a growing consumer base from diabetics and those trying to maintain a healthy weight. The company continues to spread the word through social media, print and digital ads, attending consumer events and working closely with nutritionists and dieticians.

“This is a category that has ubiquitous distribution,” Spence says. “The big brands, for which I have a tremendous amount of respect, have done a great job of making their products easily available everywhere. I think our mission and challenge is no different. It’s putting Zevia within easy reach of every one of our consumers. … I think as you look over the long term, this is a brand that eventually will be distributed in all the places that soda can be found today.” BI

Supermarket channel must adapt to appeal to consumers