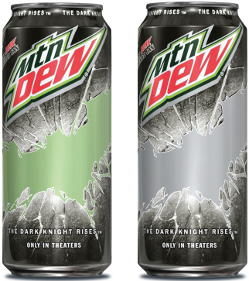 Purchase, N.Y.-based PepsiCo’s Mountain Dew brand partnered with Warner Bros. Pictures and Legendary Pictures to promote “The Dark Knight Rises,” which makes its debut in theaters July 20. Among the Batman movie-themed promotions is Mountain Dew Dark Berry, a limited-edition flavor inspired by the movie that will be available for eight weeks beginning in mid-June.

On June 18, the brand will unveil exclusive content and storylines from the film on www.dewgothamcity.com. On this site, fans can enter product codes from 20-ounce and 2-liter bottles as well as 12-packs, 24-packs and fountain cups to earn points to redeem for Mountain Dew or “The Dark Knight Rises” merchandise or sweepstakes entries for a chance to win exclusive prizes.

Bottles and cans of Mountain Dew will feature promotional graphics themed around the movie. Select 16-ounce cans also will feature thermochromic ink that will change the color of the bat symbol when chilled. The cans will hit shelves in mid-June.

“Mountain Dew is all about fueling passion and that is what this partnership is based on,” said Brett O’Brien, vice president of marketing for Mountain Dew, in a statement. “You’d be hard-pressed to find more passionate fans than those of Dew and ‘The Dark Knight’ franchise. Our goal is to offer those fans unique experiences — from package and product innovation to exclusive content and access that only Dew and Batman together could provide.”

The campaign also will incorporate Diet Mountain Dew racecar driver Dale Earnhardt Jr. Members of the “Dew Crew” have the ability to vote for one of four “Dark Knight” paint schemes to appear on Earnhardt Jr.’s No. 88 Chevrolet this season.

In-store point-of-purchase displays will appear in retailers nationwide, and TV, radio and digital advertising initiatives will kick off June 18.