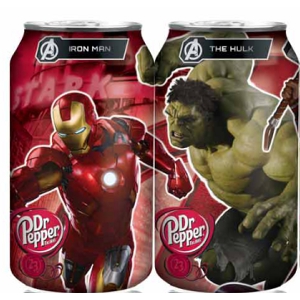 Dr Pepper Snapple Group (DPS), Plano, Texas, collaborated with Marvel Entertainment for a limited-edition collectible can series, an online game and a new commercial organized around the upcoming feature film “Marvel’s The Avengers.”

Available now nationwide, the collectible cans feature members of Marvel’s Earth’s Mightiest Heroes, who are each in a specific pose. When the eight cans are assembled side-by-side, fans can see the full power of “Marvel’s The Avengers” team linked together ready to fight a battle.

Dr Pepper’s new commercial dramatizes the potential for anyone to be a hero by featuring a group of “one-of-a-kind” people assembling to impress comic book legend Stan Lee. The commercial can be viewed online at www.youtube.com/user/drpeppervideos.

The company also released “Skrulls Takedown,” a free online game hosted on www.drpepper.com that is inspired by the battles between alien shapeshifters and the Avengers that have been featured in Marvel comic books throughout the last 40 years. Players are able to emulate their favorite Avengers member as they appear in the “New Avengers” comic book, and fight for justice as Thor, Iron Man, Captain America or The Hulk. They also are able to share high scores and challenge friends to join in on the action on Twitter and Facebook, the company says.