The saying “no grit, no pearl” has been touted by inspirational speakers for its symbolism to appreciate the process that results in the finished product/goal. When it comes to traditional anniversary gifts, the pearl gemstone also has been incorporated as a symbolic present for a couple’s 30th anniversary. Given its humble beginnings in 1988, Bend, Ore.-based Deschutes Brewery’s 30th anniversary truly could be dubbed the year of the pearl.

“Gary Fish, founder of Deschutes Brewery, opened the Deschutes Brewery Public House in downtown Bend, Ore., in 1988,” says Michael LaLonde, president and chief executive officer of Deschutes Brewery. “It was a risky venture at the time as the first brewery in a small town of around 20,000 people, but Gary’s vision of bringing people together over a beer proved worthwhile and continues to this day.”

Beginning as a small brewpub, Deschutes Brewery saw its demand exceed the original location’s capacity five years after its opening, which resulted in the development of a large-scale beer production facility.

“By 1993, the brewery outgrew the pub’s brewhouse due to volume demands and built a brewing production facility near the Deschutes River with the ability to brew in 50-barrel batches,” LaLonde says. “This facility continually increases its capacity, adding a 150-barrel Huppmann brewhouse in 2003, and more recently, 16 1,300-barrel fermentation tanks.

“With these tanks, new bottling and racking lines, and now a canning line, Deschutes has the capacity to produce approximately 450,000 barrels annually,” he continues. “In 2017, Deschutes shipped 335,000 barrels with distribution in 30 states, four Canadian provinces and six countries in the Pacific Rim.”

These operations are developing the brews that Deschutes Brewery has become known for throughout the craft beer community.

“Fresh Squeezed IPA debuted in 2013 after becoming the local’s favorite at the pubs and quickly became the No. 1 selling brand,” he continues. “Deschutes classics, Black Butte Porter and Mirror Pond Pale Ale, remain in the Top 5 selling brands. While these brands produce the highest volume, Deschutes takes great pride in the Reserve Series beers like The Abyss and The Dissident, released in limited batches every year.”

In addition to being a family owned company, Deschutes Brewery also is associated with employee ownership.

“Co-owners are proud to play an integral role in the company and are dedicated to living the core values every day by honoring customers, delivering quality, working as a team, doing their best and next time doing it better, building a healthier society, celebrating the culture of beer, and ‘owning it,’” LaLonde says. “Establishing the ESOP (employee stock ownership program) brought a higher level of personal accountability to the Deschutes team, everyone at the company plays a major role and is directly impacted by its success.”

With its 30 years of documented growth and success, Deschutes Brewery is marking this anniversary year with a collection of celebrations, LaLonde notes.

“In celebration of Deschutes Brewery’s 30th birthday this year, we’ve partnered with several Deschutes Brewery alumni to collaborate on seven exciting brews,” he says. “The first debut, Fresh Chair, includes former brewmasters Larry Sidor and Cam O’Connor, now of Crux Fermentation Project, in the creation of a blend of Fresh Squeezed IPA and Red Chair Northwest Pale Ale. There are many events planned to celebrate with fans in both the local and outlying markets.”

As “The Little Engine That Could” book and song reiterates “I think I can, I think I can,” the value of optimism and hard work can help make a seemingly impossible task possible. Although not as challenging as a steam engine tackling difficult terrain, incorporating canning operations within a craft brewing facility is a process that brewers are addressing in thoughtful, methodical ways to give their consumers what they want without sacrificing on quality. 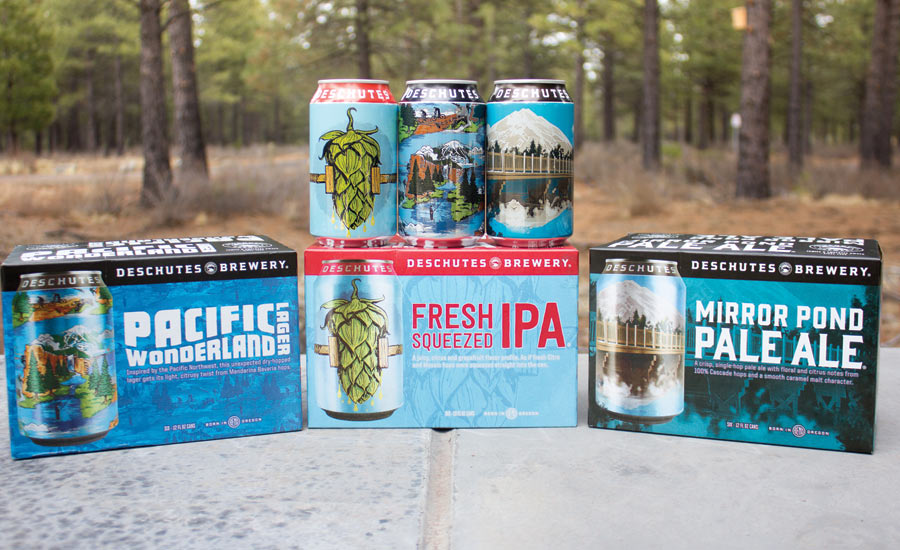 Shipment of the canned beers began in mid-February from the Bend production facility to distributors nationwide and appeared in retail stores and other establishments shortly after. The three beers will continue to be sold in bottles as well.

“We are excited that the new badass aluminum packaging will arrive just in time for spring and summer outdoor activities, where the lighter cans can be more easily transported anywhere, for any occasion.” LaLonde said in a statement at the time of the release.

Cans will be available for purchase everywhere Deschutes beer is currently sold and at new establishments where glass bottles are not allowed.

With the addition of the aluminum can packaging format, Deschutes Brewery expects approximately one-eighth of its production volume to come from this packaging addition.

“The newly installed canning line has the ability to produce 250 cans per minute,” LaLonde explains. “Thirteen percent of volume in 2018 will be
produced in cans in these three brands: Mirror Pond Pale Ale, Fresh Squeezed IPA and Pacific Wonderland. The new Deschutes canning line, a project that cost $5.5 million, was installed in a new mezzanine area of the production brewery in Bend, Ore. Planning started in May, and the line was commissioned Jan. 22.”

Yet, this is not the only new addition to Deschutes Brewery. Highlighting the company’s constant innovation, LaLonde notes the benefits it has reaped from its pilot brewhouse.

“In the spring of 2017, Deschutes installed a pilot brewhouse, manufactured by Esau & Hueber of Germany, allowing the brewers to push boundaries in experimentation in smaller quantities,” he says. “As the new research and development [R&D] arm of the brewery, capacity for innovation is at an all-time high taking the pressure off the pubs for R&D. These experimental brews go on tap in the tasting room right next door for instant consumer feedback.”

Given these investments as well as other capital expenditures, Deschutes Brewery is expecting great things for 2018.

“Deschutes is excited for the future and expects growth volume by 15 percent in 2018, with the can launch and new beer offerings,” LaLonde says. “In addition to the public house and tasting room in Bend, Ore., a brewpub in Portland and a tasting room in Roanoke, Va., look for Deschutes beer at the new temporary Deschutes Brewery kiosk in Concourse D at the Portland International Airport. A full pub will open at Portland airport in June.”

Although not on its 2018 docket, the development of Deschutes Brewery’s East Coast facility remains a highly anticipated endeavor for the company and its consumers.

In 2016, the company announced that it had selected Roanoke, Va., as the location for its East Coast operations.

Deschutes Brewery chose to add an East Coast location after the company’s distribution footprint reached the region. By having a production facility on the eastern seaboard, the brewery will be able to deliver beers to states east of the Mississippi quickly and more sustainably, it says.

Although the new facility still is in the planning stages, the company expects construction to begin next year. “Planning, design and engineering are underway for the new brewing facility in Roanoke, Va., with a target of breaking ground in 2019 and opening in 2021,” LaLonde says. “Until then, the Deschutes Brewery Tasting Room in historic downtown Roanoke is a great opportunity for us to become part of the Roanoke community and share our craft beer with local fans.” BI