TV networks like Bravo and E! are among those that have tapped into consumers desires to see how the wealthy and famous live. But consumers aren’t just vicariously living through these reality TV shows as market research data suggests that premium products, particularly within the wine market, are gaining more favor with today’s consumers.

“The consumer trends that we’re seeing are definitely in the area of premiumization,” says Scott Scanlon, principal and team leader of the beer, wine and spirits vertical at Chicago-based Information Resources Inc. (IRI). “I know it’s a term that’s used across the industry and probably expands beyond beer, wine and spirits, but premiumization [is being] seen in wine. The table wine price segment was offset by [the] decline and penetration of popular [wines], and we see a shift in preference for more premium wines, but consumers are definitely moving up in the price segmentation.”

Noting that the U.S. wine market grew 2.7 percent for a total of $11.5 billion in sales for the 52 weeks ending Dec. 24, 2017, Scanlon highlights premium wines' contribution to that performance. 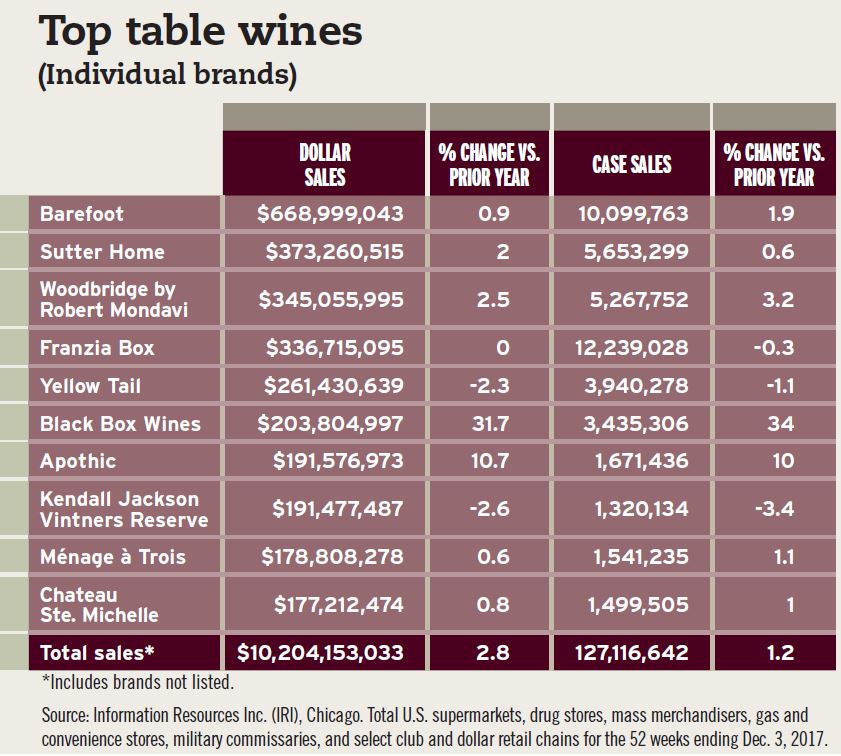 The Top 10 table wines by individual brand for the 52 weeks ending Dec. 3, 2017, according to Information Resources Inc. (IRI).

In its June 2017 report titled “Wine in the US,” Chicago-based Euromonitor International highlights that demographic trends are among the factors contributing to a growing premium wine market.

“While millennials, and to a lesser degree Generation X, are proving to be quite enthusiastic consumers of wine, their purchasing habits pose considerable differences for the wine industry to come to terms with,” the report states. “Chief among these differences is an inescapable demand for high-quality, authentic goods at an affordable price point. This frugality is reinforced by a technological savviness that allows younger consumers to have a strong awareness of price/quality dynamics. In practice, it has resulted in a willingness to buy premium wines in alternative pack types such as Tetra Paks and bag-in-box offerings, and this is at the expense of consuming wine through on-trade due to the high mark-ups involved.”

The report further highlights the connection between age demographics and premium purchase choices.

“Regardless of wine color, all still table wines exhibited a relentless shift toward more-premium offerings, specifically wines priced greater than $9.50 per liter,” it states. “Wines priced in the range [of] $9.50 to $13.49 and greater than $18.49 gained the most through the off-trade channel, in many ways growing along demographic lines. Millennials and Generation X targeted good-value premium wines ($9.50 to $13.49), while baby boomers, who possess greater wealth, contributed the most to wines prices greater than $18.49.”

Chrystalleni Stivaros, industry research analyst for Los Angeles-based IBISWorld, notes that all price points within the wine category are performing well, but that rising incomes are helping the premium segment flourish.

“As disposable incomes have been rising over the past five years, consumers are able to trade up to more premium varieties,” she says.

Analysts also expect the premium wine trend will only grow in the years to come. “I think premiumization just continues,” IRI’s Scanlon says. “We’re seeing it across the board, across all my manufacturer clients as they continue to move more products into the premium sector.”

Yet, premium’s dominance is not the only victor within the U.S. wine market showing promise. Cabernet Sauvignon has shown its increasing influence as its sales increased $73 million in the 52-week time frame compared with the previous year, Scanlon says.

“I think it is a large part of consumer taste but it also has experienced huge increases in distribution and promoted sales, but Cabernet is definitely the victor of 2017,” he says.

However, not all varietals fared as well with Merlot sales down $34 million and White Zinfandel showing an $11 million decrease in that same time period, Scanlon notes.

“There’s been a decline in the number of UPCs in those two segments as well as declines in distribution and promoted sales,” he says.

Still wine, which represents a large portion of the U.S. wine market, had a respectable year as table wines were up 2.5 percent in dollar sales and 1 percent in case sales, Scanlon says. However, it was the smaller sparkling wines segment that showed its growing influence in 2017. 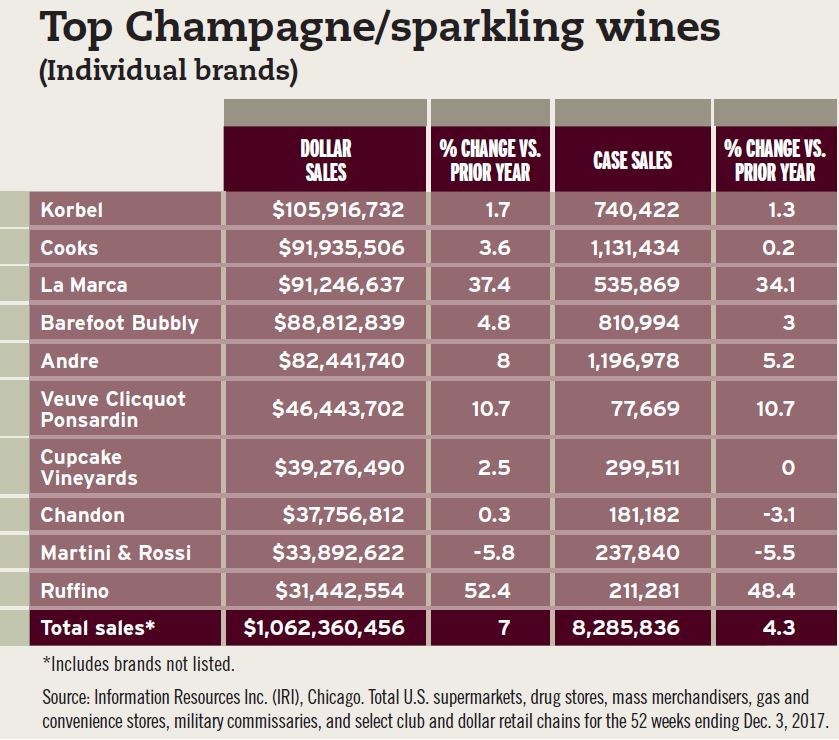 The Top 10 Champagne/sparkling wines by individual brand for the 52 weeks ending Dec. 3, 2017, according to Information Resources Inc. (IRI).

“Sparkling wine, on the other hand, grew 7 percent [in dollar sales] and 4.2 percent in case sales, so the big growth is definitely from the sparkling segment; however, it represents a much smaller portion of the overall wine [category],” he says.

The positive performance by sparkling also is a contributing factor to the growth of premium wines, Scanlon adds.

Noting increased distribution of super-premium and ultra-premium wines was ever present in 2017, he says that sparkling’s growth against those price points is similar to what can be seen across the traditional table wine and premium sparkling segments.

The growth of sparkling wine, however, has been emerging for the past few years, as noted in Euromonitor’s report.

“Sparkling wine was the fastest growing category within wine for the fourth year running in 2016 in total volume terms,” it states. “Growth of sparkling wine continued to stem from non-Champagne wines, most identifiably Prosecco, but wines such as Cava and Sekt also garnered attention. The lower unit prices of other sparkling wines allowed them to become everyday luxuries in a way that was cost-prohibitive for many consumers to do with Champagne, a situation that was accentuated during the severe economic recession beginning in 2008. While the recession has long vanished, consumer interest in these other sparkling wines persists alongside renewed growth of Champagne, which exhibited high single-digit volume growth beginning in 2013 and an 8 percent rise in 2016.”

Coming off a year of 4.7 percent growth in 2016, sales of domestic wines experienced a slowdown as sales grew 2.2 percent in 2017, IRI’s Scanlon says. He adds that California wines, which account for the majority of domestic wines, were up 1.8 percent. 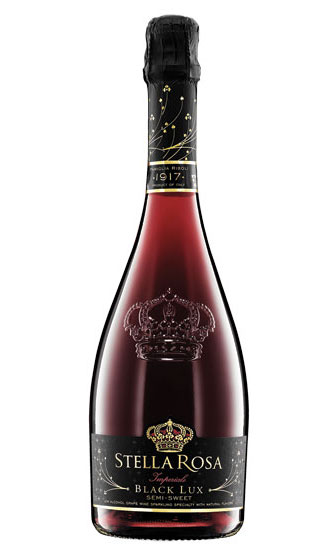 IBISWorld’s Stivaros highlights that the U.S. wine market is dominated by the West Coast, but adds that other regions are benefiting from the opening of new wineries.

“The West is overwhelmingly the most prolific winemaking region in the country,” she says. “California alone accounts for 40.4 percent of industry establishments and 60.4 percent of industry employees. Also in the West, Washington state and Oregon together hold about one-sixth of the nation’s wineries. The number of new wineries is expected to continue growing in these aforementioned states plus New York. While other states have ramped up wine production, California will remain the top wine-producing state.”

The California wine market awaits to see what impact could be felt following the wildfires that plagued the state in late 2017. Because only 10 percent of California’s wine production comes from Sonoma and mainstream media outlets reported that 75 to 90 percent of vineyards had been harvested, many are optimistic that minimal effects will be seen, IRI’s Scanlon says.

Although domestic wine represented 78 percent of dollar sales in the 52 weeks ending Dec. 24, 2017, imported wines showcased stronger growth at 4.7 percent, albeit from a smaller base, Scanlon says.

He notes that Italy, Australia, New Zealand and France were countries from which the growth originated.

“I really think it’s on the flavor profiling that it’s a sweeter flavor that consumers seem to be gravitating toward that are stemming from those countries that I had mentioned, especially in the areas of the Proseccos, wine where you have a sweeter taste, or the Sauvignon Blancs that are from that region as well that we’re seeing a growth pick up and that’s contributed toward the imported countries,” Scanlon explains.

IBISWorld’s Stivaros adds that the positive performance of imported wines is set to continue. “Over the five years to 2017, IBISWorld expects imports to grow at an annualized rate of 2.1 percent to $7 billion. Imports have grown alongside higher disposable incomes and an evolving U.S. palate for imported brands,” she says.

In Euromonitor’s report, the market research firm highlights the influence of wines from the southern hemisphere.

“Italian wine is the most imported foreign wine, with France being the second largest exporter of European wine to the U.S. by volume,” it states. “These key wine-producing nations continued to receive competition from countries in the southern hemisphere, such as Chile, Argentina and Australia, whose imports comprise primarily value wines; however, wines imported from New Zealand and South Africa are more highly regarded.”

As the U.S. wine market sees increasing influence from emerging wine-producing countries, the category also is seeing a deviation from its traditional packaging. Aluminum cans, cartons, bag-in-box and even pouches have challenged conventional consumption norms and are proving to be a growth avenue for brand owners.

“The new packaging is small in its representation, in the U.S. market it’s less than 10 percent, but the growth outpaces that,” IRI’s Scanlon says. “Sales from the new packaging grew three times faster than the category, so the new packages that [were] mentioned — cans, box, pouches — are growing at 8.4 percent vs. 2.7 percent. Canned wine in particular is 20 times the rate, so canned wine is growing at 53.8 percent.”

Scanlon expects that new packaging solutions will continue to emerge within the U.S. wine market, benefiting manufacturers and consumers. BI