How to bring value-minded consumers into your bar

For decades, TV shows like “Cheers,” “The Simpsons,” “Sex and the City,” and “How I Met Your Mother,” among others, have highlighted the social tradition of meeting friends at a local bar or club for a drink. However, since the Great Recession, consumers seem to be pulling back on this tradition because of their lower levels of discretionary income.

“The biggest challenge facing the on-premise channel is continued weakness in traffic trends, despite the recession having officially ended several years ago,” explains Peter Reidhead, vice president of strategy for GuestMetrics LLC, Leesburg, Va. “Younger consumers are continuing to be under economic pressure and are not going out as often as they used to, are choosing to entertain at home because it is less expensive, and, if they do go out to restaurants and bars, they aren’t staying out as late as they used to.”

Reidhead notes that traffic to the on-premise channel was generally weak in 2014, contracting 0.7 percent compared with 2013. However, the channel’s performance did steadily improve throughout the year to end on a slightly positive note, he says. Plus, although performance declined, it actually declined less than in previous years, meaning the channel is moving in the right direction, he points out. “Traffic was down 2.4 percent during 2012 and down 1.4 percent during 2013, so it was encouraging to see the traffic trends were less negative during 2014.”

To help pull consumers back to their local watering holes or even to the hottest new restaurant, on-premise operators need to find ways to offer consumers a unique experience at a valuable price, experts note. One tactic to offer more value has been the “bring-your-own” trend, points out Bethany Wall, foodservice analyst at Chicago-based Mintel. “Bring-your-own helps encourage consumers to return to on-premise, since consumers have the option of saving money by supplying their own items,” she explains. In addition, bring-your-own food policies allow consumers with dietary restrictions to ensure that their needs are met and bring selections they will enjoy, she says. In fact, a February 2014 Mintel survey of 1,123 Internet users aged 22 and older who had consumed alcohol on-premise within the past month found that 36 percent of these consumers would be interested in bring-your-own food bars and nightclubs, according to Mintel’s May 2014 report “On-premise Alcohol Consumption Trends.”

In addition, this model offers a savings benefit to bar operators, because they do not have to employ a kitchen staff or purchase kitchen equipment, she notes. If a bar still wants to offer food for its patrons’ enjoyment, it can partner with a nearby foodservice operator, food truck or delivery service to make service fast and convenient, she adds.

Once consumers are at bar or restaurant, promotions on premium brands can be especially important, as consumers are increasingly choosing to indulge in premium alcohol beverages, according to Donna Hood Crecca, senior director at Technomic Inc., Chicago. Although the channel declined in alcohol volume in each of the past two years, it grew 1.7 percent in alcohol dollar sales as consumers traded up, Technomic reports. “Premiumization is an ongoing trend, and we continue to see growth in categories such as bourbon, single-malt Scotch, Irish whiskey, Cognac and imported liqueurs,” Crecca says.

Within beer, craft beer, imported beer, hard cider and some super-premium domestic brands have been showing momentum, with craft beer marking another year of double-digit volume gains last year, Crecca says. This gives craft beer a nearly 20 percent share of the on-premise market, she says. Mexican imported beers also are a hot spot in the market, and the introduction of Victor, N.Y.-based Constellation Brands Inc.’s Corona beers on tap has intensified the battle for tap handles within on-premise, she notes. As a result, major domestic beers are ceding share, and in some locations tap handles, to these types of beers, she explains.

However, domestic beers should not be overlooked by on-premise operators, GuestMetrics’ Reidhead cautions. “We’ve seen that there is a ‘sweet spot’ in terms of an establishment’s beer offerings, where it can hurt beer sales to go to an offering that is too craft-centric,” he says. “There should almost always be at least one domestic mainstream beer on tap.”

Consumers also continued to trade up in wine in the past year, with the category posting a slight gain of 0.7 percent, outpacing beer’s 0.2 percent growth, GuestMetric’s Reidhead says. “[This] was evidenced by the fact that the more expensive price segments within wine took aggressive share from the lower-end segments,” he explains.

Millennial wine consumers especially appreciate quality wine and are willing to pay extra for it, Next Level Marketing’s Ginley says. This consumer group also is interested in discovering new wines from countries like Chile, New Zealand and Spain, he says. Mintel’s Wall notes that, in line with this, some restaurants are exploring new countries and regions of origin for wine to give these consumers a memorable and differentiated experience.

Cocktail offerings, especially signature cocktails, are another way the on-premise channel can offer a differentiated experience. In fact, a February 2014 Mintel survey found that 58 percent of consumers aged 22 and older who had consumed alcohol on-premise in the past month find signature drinks appealing.

Last year, GuestMetrics noted a strong shift in consumer preference from drinking spirits straight, neat or as a shot to drinking cocktails, specifically signature cocktails, Reidhead notes. “During 2014, spirits consumed straight, neat or as a shot grew sales by 0.7 percent, while spirits consumed in a cocktail grew by 3.8 percent,” he says. Mule, Old Fashioned and Bloody Mary cocktails showed the most momentum last year, but non-spirits based cocktails, including sangrias, mimosas and bellinis, also showed strong growth, he adds.  Plus, traffic trends for morning and lunch cocktails, including Bloody Marys, mimosas and bellinis, were much stronger than trends during dinner and late-night occasions, he notes.

Also trending in the cocktail realm is the use of fresh ingredients for a local appeal, Mintel’s Wall notes. An increasing number of restaurant operators are partnering with local breweries and spirits producers to create menus that are hyper-local and highlight their local ties or using locally grown herbs and botanicals to add flavor to cocktails, she says.

Another trend is including tobacco in cocktails to satisfy the craving that smokers are feeling when they cannot smoke in bars and restaurants, Wall says. According to American Nonsmokers’ Rights Foundation, Berkeley, Calif., 39 states and Washington, D.C., have local laws in effect that require non-hospitality workplaces and/or restaurants and/or bars to be 100 percent smoke free.

Following consumers’ interests in cocktails and spirits, the category achieved 1.9 percent growth on-premise, more than wine and beer, GuestMetric’s Reidhead says. As operators use signature cocktails and other offerings to set their venues apart and consumers return to bars and restaurants as the economy recovers, the on-premise channel is on track to make 2015 its strongest year of the past several years, he says. 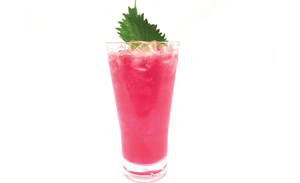 3.       Shake over ice and strain over fresh ice in a highball glass.

1. Combine all ingredients in a medium saucepan set over high heat. Bring to a boil, then drop heat to low and simmer uncovered for 10 minutes.

2. Remove saucepan from heat, cover, and let steep for five minutes. Place a fine-meshed sieve over a large measuring cup or bowl with a pour spout and pour syrup through. Let drain completely and discard flowers.

3. Pour the syrup into a clean, dry 32-ounce jar with lid, cover and let cool. Store syrup in refrigerator.

How to maximize your holiday merchandising