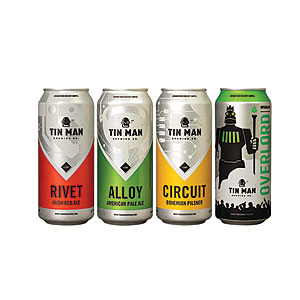 Tin Man Brewing Co. released four of its core craft beers in 16-ounce cans from Rexam Beverage Can America. The craft brewer noted that it chose to package its Circuit Bohemian Pilsner, Alloy American Pale Ale, River Irish Red Ale and Overlord Imperial IPA in cans because it is the ideal package for craft beer. Circuit Bohemian Pilsner is bright in color and clarity with a mild aroma and a crisp, energizing flavor, the company says. Alloy American Pale Ale delivers a golden hue, light body and robust hops, it describes. River Irish Red Ale boasts a multitude of rich, sweet flavors with a slight hint of malt for a clean, dry finish, it says. Overlord Imperial IPA features a balance of Columbus, Cascade and Centennial hops with a sweet, pineapple aroma, it adds. To further highlight its interest in aluminum cans, Tin Man also hosts the website cansarebetter.com to educate consumers about the package’s benefits.