Click here to vote for this product in our October New Products Poll (ends 11/19/14). 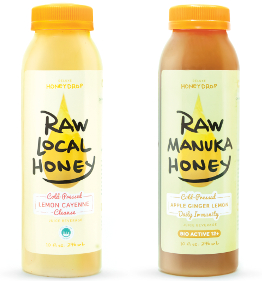 Honeydrop Beverages launched two new cold-pressed juices featuring honey. Deluxe Honeydrop Cold-Pressed Lemon Cayenne Cleanse contains raw, local honey sourced from local beekeepers in New York, New Jersey and Connecticut. According to the company, this honey contains pollen from local flowers that might help alleviate grass allergy symptoms. The lemon in the beverage will help alkalize the body, and the cayenne pepper can increase metabolism, it adds. Deluxe Honeydrop Cold-Pressed Apple Ginger Lemon Daily Immunity is made with raw Manuka honey from New Zealand. Manuka honey often is referred to as “nature’s antibiotic” because it contains methylglyoxal, which can fight infections, the company notes. A 10-ounce bottle of Lemon Cayenne Cleanse retails for approximately $5.99; and a bottle of Apple Ginger Lemon has a suggested retail price of $9.99. Honeydrop Beverages donates 1 percent of the products’ proceeds to local beekeepers who are active in their communities in order to build and maintain beehives to fight against Colony Collapse Disorder, an epidemic threatening the global bee population.