Although French Market Coffee, a part of Reily Foods Co., has previously been known for its signature red coffee can, which harkens back to the company’s original Coffee & Chicory label introduced in the late 19th century, the brand partnered with Crown Food Packaging North America, a division of Crown Holdings Inc., to refresh 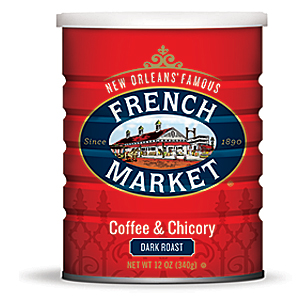 the packaging in line with its national expansion. After Reily Foods worked with its creative agency to come up with new designs for its Dark Roast and Dark Roast with Chicory blends, it turned to Crown to execute the designs, the company says. This included scaling and balancing elements like a reflective gold crown and a subtle fencing background for the rounded surface of a metal container, it explains. The new 12-ounce coffee cans, which feature an easy-open end and a plastic overcap, retain the look and feel of French Market Coffee’s original red tins but include an enhanced design that keeps them in alignment with the brand’s current image, it adds.