The Brewers Association will host the 31st edition of its Craft Brewers Conference (CBC) & BrewExpo America from April 8 to 11 in Denver. The four-day event is expected to draw 7,000 attendees in addition to 400 exhibiting companies from the craft beer industry. 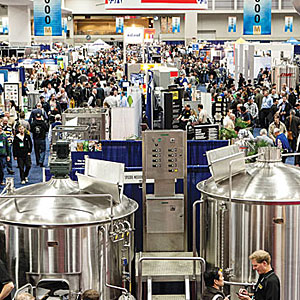 CBC opens April 8 with a special orientation for first-time visitors, followed by a welcome reception for all attendees. Food advocate and activist Michael Pollan will kick off the conference activities April 9 with his keynote address, followed by the general session.

Various educational seminars will take place April 9-11, including the new safety seminar track featuring four new seminars. These seminars will cover topics such as how global harmonization is driving regulatory changes to safety items such as safety data sheets and pictogram labeling, how to implement a hazard communication program, tips on improving company safety and avoiding stressful and costly OSHA inspections, and brewery insurance.

CBC 2014 also will host the World Beer Cup (WBC), which often is referred to as “The Olympics of Beer Competitions.” As the world’s largest global beer competition, WBC creates greater awareness about different beer styles and flavors while promoting international brewing excellence, according to the Brewers Association. A professional panel of beer judges will honor the Top 3 beers in 91 categories with gold, silver and bronze awards in an awards ceremony on April 11.

BrewExpo America, which takes place April 9 and 10, represents the tradeshow portion of the event. The tradeshow is targeted at the brewery and brewpub industries and creates a forum for craft beer exhibitors and buyers to develop business relationships. It also gives brewing and brewery restaurant professionals the opportunity to learn about the newest products in the market. Exhibitors will include ingredient suppliers, equipment manufacturers, packaging companies, consultants and more.

More than 2,700 breweries currently operate in the United States, pouring $33.9 billion into the economy in 2012, the Brewers Association reports. Interest in full-flavored craft beer continues to drive demand for small and independent brewers to meet consumer demands, it adds. CBC provides an environment for new and established members of the craft brewing community to connect, share ideas and learn about the growing industry.

For more information about CBC and BrewExpo America, visit craftbrewersconference.com.