This website requires certain cookies to work and uses other cookies to help you have the best experience. By visiting this website, certain cookies have already been set, which you may delete and block. By closing this message or continuing to use our site, you agree to the use of cookies. Visit our updated privacy and cookie policy to learn more.
Home » Taco Bell embarks on largest beverage menu expansion in its history
Beverage NewsChannel Strategies 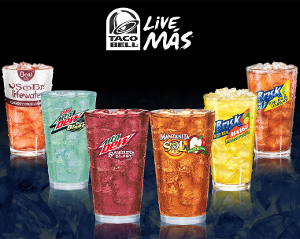 In particular, the three new carbonated soft drinks are Diet Mtn Dew Baja Blast, Mtn Dew Sangrita Blast and Manzanita Sol. This marks the first time that Diet Mtn Dew Baja Blast and the citrus-infused Mtn Dew Sangrita Blast have ever been offered in any form, the company notes. The other three non-carbonated drinks include Brisk Mango Fiesta, Brisk Half & Half Iced Tea & Lemonade, and SoBe Lifewater Yumberry Pomegranate. Suggested prices are $1.39 for a 16-ounce cup, $1.49 for a 20-ounce cup, $1.69 for a 30-ounce cup, and $1.79 for a 40-ounce cup. The new beverage offerings will be added to select Taco Bell locations immediately and will expand nationwide throughout the year.

“We hear how fanatic our customers are about Mtn Dew Baja Blast, and this inspires us to continue introducing exciting and exclusive beverages to Taco Bell fans,” said Taco Bell Chief Marketing Officer Chris Brandt in a statement. “Beverages — like many of our food items — can be enjoyed on-the-go, which fits our fans’ lifestyles to get more out of every day. We really want to develop beverages that are as unique, tasty and portable as our food.”

As a key element in the quick-service restaurant’s ongoing 10-year growth plan to double the business, these new flavors and Taco Bell’s continued innovation in specialty beverages will help to extend the snacking day-part for the brand, it says.