Beverage business focuses on giving back to indigenous communities

When Tyler Gage, co-founder and co-chief executive officer of Runa LLC, left California for South America, he was not planning to build a beverage company. “I originally went down to study indigenous languages in the Amazon,” he explains. “I had a professor in school who worked with these tribes in the Amazon, and I went with him primarily to do linguistic research.” 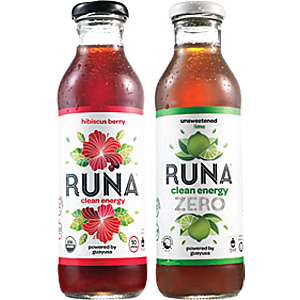 While working with these Amazonian tribes, Gage experienced his first taste of guayusa, a brewed beverage produced from the leaves of a caffeinated Amazonian holly tree ilex guayusa. “The whole community, particularly the hunters, gets up at 3 in the morning, and they boil these huge clay pots full of guayusa,” he describes. “They sit around the fire, drink guayusa, tell stories, interpret dreams, and do the whole routine. They brewed it like tea, so they would harvest leaves in these big pots and drink it like tea.”

However, guayusa is not technically tea; it’s a member of the holly family, Gage says. As a different species, guayusa has a higher caffeine content than tea — with the brewed format offering about as much caffeine as espresso — and twice the antioxidant content of green tea, according to the company.  “So, the combination is what we call balanced, clean energy from the mix of antioxidants and caffeine,” Gage says.

Guayusa also differs from tea in terms of flavor, Gage says. “The leaf doesn’t have any tannins, so it’s not astringent like green or black tea,” he says. “It’s got a super smooth flavor, and that’s a really big point of difference, because we can create unsweetened, zero-calorie products with no sugar.”

From his Amazonian experience with the brewed beverage, the idea for the Brooklyn, N.Y.-based company and its flagship Fair Trade, organic Runa guayusa beverage was born. Gage partnered with his long-time friend Dan MacCombie to start a guayusa beverage company that would support indigenous farming communities in the Amazon.

“Our mission is to improve livelihoods for Amazonian farmers, and we do that by being a successful company,” Gage says. Runa purchases its more than $120,000 worth of guayusa leaves directly from more than 2,000 farming families in Ecuador. This economic partnership, in turn, supports a sustainable farming initiative that preserves the rainforest instead of cutting down trees for harvesting, he explains. Through its spin-off nonprofit organization, The Runa Foundation, the team also conducts experiments to find new crops and new species that the farmers can grow sustainably. It also helps create better livelihoods for the farming communities by supporting the creation of farmer cooperatives and providing funds to help the Ecuadorian communities invest in their own development. The company plans to expand its economical and social efforts into Peru, he adds.

This social mission, along with Runa’s Fair Trade and organic characteristics and health benefits, resonates with young, professional consumers, who have become the brand’s target audience. In addition, because Runa is a functional beverage that provides caffeine, it can serve as an alternative to other caffeinated products, Gage says. “The main times that people are drinking Runa is from 11 a.m. to 3 p.m.,” he says. “People might not want a third cup of coffee [at that time, and] they aren’t necessarily going to drink a mainstream energy drink at work. They want something that’s refreshing [and] healthy to get them through the rest of the day.”

The company and the brand’s name, Runa, also speak to this aspect of clean, refreshing energy. In the indigenous Kichwa language, which is spoken by Amazonian tribes in Ecuador, “Runa” has approximately 20 different meanings, Gage explains. The simplest meaning is “a fully alive person,” or a human who embodies the life force of a human being and is full of life, energy, awareness and passion, he says. The energy provided by Runa beverages fuels the lives of consumers to enable them to create, study and work, according to the brand’s website.

Runa offers two products in different packaging formats and flavors. Runa energy drinks come packaged in cans, whereas Runa tea is available in ready-to-drink (RTD) glass bottles, boxes of tea bags, and loose-leaf tea tins. With this portfolio, the company earns a few million dollars in sales each year, with the RTD teas being the most popular format, Gage says.

The brand’s distribution is primarily focused on the natural channel, par-ticularly on the East and West coasts, Gage says. Runa products are available in almost every region that Whole Foods Market covers, with the brand recently gaining approval to launch in Midwest stores next spring, he says. In total, the functional beverages are available in more than 4,000 locations across the country, including grocery and specialty retailers, local co-ops, and collegiate and corporate foodservice venues.  Additionally, the company is pursuing some direct-store-distribution opportunities in New England to help the product gain further distribution in the region.

Looking to the future, the Runa team is prepared to invest its time and resources in helping the company grow and, in turn, support Amazonian communities. “Our way of doing business is something that we care a lot about,” Gage says. “Obviously, Runa is our passion, and we love guayusa, but if we can make our business work, in many ways, it means so much more just for this movement of responsible business and really creating an impact on more communities through business.”