As the year begins to wind down, it’s time to look at the factors that are likely to have a significant effect on beverage fleet operations in 2014. If the last few years 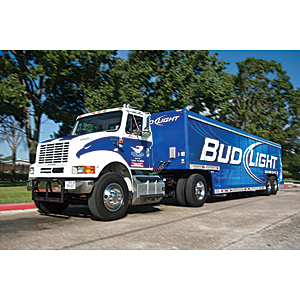 are any indication, using alternative fuels (alt-fuels) to control operating costs will be a major factor again in 2014. At this point, most distributors are focusing their alt-fuel considerations on natural gas, driven mainly by stable, lower prices for this domestically produced fuel.

One of the industry’s leading fleet executives, Ed Pritchard of Houston-based Silver Eagle Distributors (SED), was among the earliest adopters of natural gas fuel for his delivery fleet. As part of our alt-fuel reader query, Pritchard shared his opinions in the following Q&A.

Beverage Industry: Are you currently using or planning near-term adoption of any alternative fuels, and if so, which ones?

Ed Pritchard: At Silver Eagle, we have been involved in the alt-fuel game for quite a while now and feel pretty comfortable with the technology, primarily in the form of compressed natural gas (CNG). We started out converting existing trucks and are now purchasing trucks built by the [original equipment manufacturers] (OEMs). So far, they have proven to be well refined.

BI: Are you actively considering the use of any alternative fuels in the mid-term future, and if so, which ones?

EP: We're planning to expand our CNG footprint. By the end of 2013, we'll have over 90 vehicles running on this type of fuel and plan to do another 40 in 2014. We've been intentionally taking our time with these projects, not getting too overly aggressive. There is a lot of research going on out there with the OEMs and in the aftermarket looking for solutions to control operating costs, clean up vehicle emissions, and reduce dependence on foreign oil. We'd hate to be the fleet that went all in just about the time that some type of national event destroys the economics that are currently bolstering the push for natural gas. We feel that right now it's important to seek fuel diversity to a certain point.

BI: Whether it's existing use or near/mid-term future plans, what are the key motivating factors driving your consideration of alternative fuels?

EP: We are a regional operation. Many of our trucks run very tight routes. The duty cycle is fairly extreme, but we don't run a lot of miles. As a result, the lower cost per [gasoline gallon equivalent/diesel gallon equivalent] (GGE/DGE) for natural gas takes a long time to offset the incremental cost of natural gas technology purchases. This return on investment (ROI) can be realized much faster with incentive dollars, but there are some pretty strict reporting demands that go along with those funding dollars. For SED, the primary driver behind our adoption of CNG is driven by environmental initiatives. Based primarily out of Houston and San Antonio, air quality is of major concern. As a major transportation entity in these large metropolitan areas we want to do as much as possible to reduce the carbon footprint of our delivery operations.

BI: Why are you using/considering one alternative fuel vs. another?

EP: Right now we're focusing our efforts on the regional equipment with CNG because we have learned to maintain and operate them with a very similar cost per mile equivalent to their diesel counterparts. We anticipate that down the road we'll expand to liquefied natural gas (LNG) for our long haul units because of the extended range. We'd be primarily fueling these units at retail, and the infrastructure is in the final stages of development in the areas we need to travel, so it seems like a good fit. In this particular segment of the operation, the miles run on an annual basis are much higher, so we expect to see a 100 percent ROI within the first 24 months of operation.

BI: In your consideration of alternative fuels, how important are tax incentives and grants?

EP: I think the incentives are good. Generally speaking, incentives are tax dollars being invested back into well-managed companies to help stimulate growth of alternative fuel vehicles as well as infrastructure. If indeed we are ever going to reduce our dependence on foreign oil, and natural gas is the answer, then we need to get both the demand, and the supply in place to develop a foundation for these alternatives. The incentives come with great responsibilities to report back with detailed information about fuel consumption, vehicle maintenance, utilization, and so on, but most fleets with the desire to take on complex projects of this nature already have this data immediately available. In our case, we have converted some segments of our fleet with the help of incentives. In other segments we have elected to make the change and cover the incremental costs completely on our own. Largely depends on the vehicle application and whether or not the scope of the project can qualify for State or Federal Funding.

BI: What is your opinion on the future of alternative fuels in the beverage industry?

EP: I don't think conventional fuels are going to do anything but increase in costs. Perhaps we'll do more exploration and drilling for crude [oil] here in the U.S., which could help, but the population continues to grow, and the landscape is slowly disappearing for that type of resource. We have seen total consumption creep up and slide back down, largely impacted by a number [of] seasonal, social and political issues. Any time there is some type of international strife, there is the threat of being cut off from foreign imports, which drives prices up again. Ultimately, we need to strive for better security and long-term sustainability of our ability to fuel transportation needs. Right now it looks like natural gas, but who knows, there could be something even better announced next week, which is why we're going at this natural gas conversion process with a bit of strategic restraint.