In honor of the Scotch Whisky Association’s (SWA) 100th anniversary, SWA brought together an array of images and artifacts, including images of whisky barrels 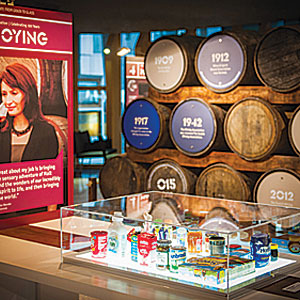 being unloaded at the Broomielaw on the River Clyde in Scotland, classic advertising campaigns, and bottles from the last 100 years, from several Scotch whisky producers and enthusiasts for its “Scotch Whisky: From Grain to Glass” exhibition at the Mitchell Library in Glasgow, Scotland. The new exhibition, on display through July 31, tracks the landmark events in the last 100 years that have shaped the SWA and the Scotch whisky industry. Exhibition visitors can learn everything from how Scotch whisky is made to how it is marketed and exported, the company says. Scotch whisky exports are worth approximately $5.7 billion a year, and the industry directly employs more than 10,000 people across Scotland, many of which are in and around Glasgow, it says.