Coca-Cola puts refreshment at your fingertips with ‘The Ahh Effect’

The Coca-Cola Co.’s latest digital campaign seeks to entice teens on the platform they know and love best — their cell phones, tablets, computers and other digital 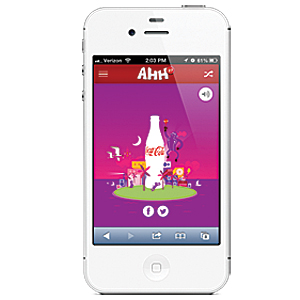 devices. “The Ahh Effect” is a series of 61 websites, starting with aah.com and adding an “h” to each URL until the maximum character count is reached, that feature games, films and images all designed to remind teens of the features that Coke offers. For example, The “Ice Toss” game challenges users to launch ice cubes into a moving cup of Coke to keep the beverage at 37 degrees — the ideal temperature for ensuring the maximum “Ahh” effect, the company says. Others have a more comical side, like “The Longest Ahh,” hosted on the longest URL of the series, which features bright red lips singing “Ahh” at different pitches for as long as the user will listen. The Coca-Cola Co. also plans to award 25 of the URLs to fans who submit their own creative interpretations of what “Ahh” means to them, it says.