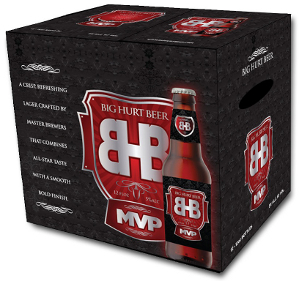 Named after former Chicago White Sox Major League Baseball player Frank Thomas, also known as “The Big Hurt,” Big Hurt Brewing Co. launched Big Hurt Beer (BHB) in cans and BHB MVP in bottles. BHB is an imperial lager with 7 percent alcohol by volume, and BHB MVP is an American lager that contains 5 percent alcohol by volume. A 12-pack of 12-ounce BHB cans retails for approximately $10, and a 12-pack of BHB MVP 12-ounce bottles has a suggested retail price of $12.