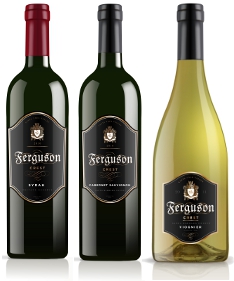 Stepping off the stage and into the vineyard, Fergie has teamed with her father to launch Ferguson Crest wines. Grown on the family’s vineyard in Solvang, Calif., the line includes a 2010 Syrah, a 2010 Cabernet, a 2010 Viognier, a 2011 Viognier and a 2011 red blend called Fergalicious. Ferguson Crest Syrah is the company’s signature varietal and features flavors of black pepper, graphite, chocolate and cassis, it says. Ferguson Crest 2010 Cabernet has red berry flavors with notes of cedar and toasted oak, it adds. The 2010 Viognier features notes of apricot and lavender, and the 2011 Viognier is a balanced white wine, it says. The 2011 Fergalicious is the winery’s first red blend, combining Cabernet Sauvignon, Syrah, Grenache and Merlot grapes. A 750-ml bottle of the 2010 Syrah has a retail price of $30; a 750-ml bottle of the 2010 Cabernet retails for $24.50; 750-ml bottles of both Viognier wines retail for approximately $22.50 each; and a 750-ml bottle of the 2011 Fergalicious red blend retails for $35.