Up Close With: Knob Creek

With a family lineage that includes great-grandfather Jim Beam, seventh-generation Beam master distiller Fred Noe is loyal to the bourbon traditions set by his 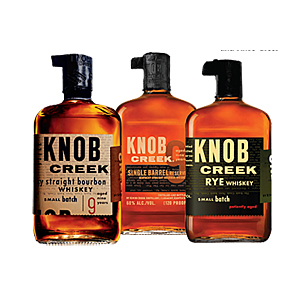 family. His father, Booker Noe, started Knob Creek Distillery, Clermont, Ky., 20 years ago with a goal to create bourbon that was made in the pre-Prohibition style. Keeping within the historical theme, he named the brand after a little creek that was located along Abraham Lincoln’s childhood home.

Booker Noe started with the best, most perfectly aged barrels of bourbon, his son explains, and blended them together in small batches. The resulting spirit was bottled at higher proof in order to create Knob Creek Bourbon, a superior quality, hand-crafted spirit that was bursting with flavor, Fred Noe explains.

“You have to remember that at this time the terms 'craft,' 'super premium' and ‘small batch’ didn’t exist in the whiskey world, so we developed a new category with the introduction of Knob Creek that really changed the category,” he says. “Since Knob Creek was first released, interest in authentic, high-quality bourbons has grown tremendously and consumers are looking to expand their spirits repertoire.”

Touted as the world’s No. 1-selling super-premium bourbon, according to Fred Noe, Knob Creek, a brand of Deerfield, Ill.-based Beam Inc., remains a leader in the category that his father created.

“When my father released Knob Creek 20 years ago, it was unlike any other bourbon available at the time,” Fred Noe says. “It is crafted the way great bourbon ought to be — with patience and care. This dedication results in a bourbon with an undeniable big, full flavor, setting the standard for what real bourbon should taste like. It is aged for a full nine years — longer than many other bourbons — allowing the liquid to absorb more of the sugar in the wood and adding to its signature flavor.”

“When I created Knob Creek Single Barrel Reserve, it wasn’t so much about releasing a new small batch bourbon as it was about continuing the tradition that my father started 20 years ago: giving our fans a truly unique bourbon experience,” he explains. “With each barrel being carefully hand-selected and bottled without blending, Knob Creek Single Barrel Reserve offers even more of the rich, mature flavor that bourbon lovers have come to expect from Knob Creek.”

Using different base grains than its original bourbon’s corn base, the distillery launched Knob Creek Rye in select markets in March, followed by national availability in July. Made with a blend of the high-quality rye to create a smooth, yet spicy whiskey, Knob Creek Rye follows the same hand-crafted and aging process as its fellow Knob Creek brands, the company says.

“What makes Knob Creek Rye the perfect addition to our portfolio is in its similarities,” Fred Noe says. “Like our bourbons, it is carefully hand-crafted and patiently aged, producing the rich, mature flavor and luxurious finish that our fans have come to expect from Knob Creek. It is also bottled at 100 proof like our original Knob Creek Bourbon, giving it a smooth texture that makes it versatile enough to enjoy neat or in your favorite cocktail.”

Releasing a rye variety also follows in historical precedence as rye whiskey was the most popular spirit in America in the early 1900s, according to the company. However, Prohibition forced many whiskey fans to turn toward the sweeter, more robust flavor of bourbon, it adds. Due to the growing interest in high-quality craft spirits and the resurgence of contemporary cocktail culture, the company notes that more consumers and bartenders are interested in bourbon’s spicier counterpart.

“Consumers, bartenders and several notable chefs, such as Michael Symon, have had nothing but great things to say about our rye whiskey,” he explains. “But the real honor was having Knob Creek Rye named the 'Best Rye Whiskey' at this year’s San Francisco World Spirits Competition — even before bottles hit shelves, it was already being touted as an award-winning whiskey.”

“With consumers interested in seeking out high-quality, hand-crafted spirits, bourbon and rye whiskey alike are seeing a huge increase in demand,” he says. “And our portfolio offers whiskey lovers everything they need to satisfy their different tastes — the big, full flavor and smooth finish of our original Knob Creek Bourbon; the higher proof, more sippable Knob Creek Single Barrel Reserve; and our spicy, yet versatile Knob Creek Rye. So we certainly don’t expect things to slow down any time soon.” BI