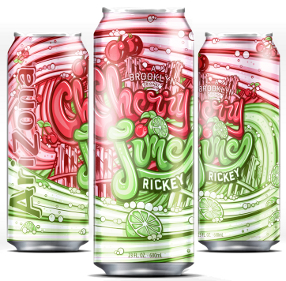 After its three-month-long 20th anniversary contest initiative, New York-based Arizona Beverages announced that fans have selected the package design for its new Cherry Lime Rickey flavor. This is the first Arizona beverage to be completely created by fans, the company says.

During the contest, designs were submitted from around the globe to Arizona’s microsite, powered by Creative Allies. Of the final five designs, fan Kenny Vidinich's “OneVibe” design received the most fan votes for the winning label. Vidinich is the creator of OneVibe creative studio located in Honolulu. Other finalists included Ricky Linn of Pasadena, Calif.; Satchel Vestil of Cebu, Philippines; Manuel Peón of Mexico; and Tin Bacic of Croatia.

"The 20th Anniversary Contest is our way of thanking Arizona's loyal fans, as well as allowing their voice and creativity to come to life,” said Jackie Harrigan, Arizona's global communications director, in a statement. “It is from them that we, as a brand, have always drawn our inspiration from and we want to make sure they know that we are fans of theirs as well.

“7-Eleven was a natural choice for us to debut and exclusively sell the Cherry Lime Rickey flavor,” she continued. “Just like AriZona products, 7-Eleven is American-founded with stores accessible worldwide and has the same loyal consumer following."

In addition, each package will feature a quick-response code — another first for Arizona — that will unlock more prizes when scanned, the company says. The beverage will be sold exclusively at 7-Eleven stores as early as September.