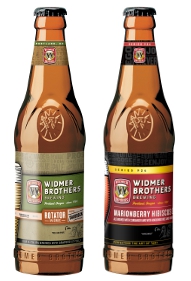 Widmer Brothers Brewing introduced three new beers for the summer months. Shaddock IPA blends the sweet aroma and distinct flavor of grapefruit with the tropical notes found in Citra hops, the company says. The beer offers hints of spice and significant but smooth bitterness, it adds. Another new release is Marionberry Hibiscus Gose, a traditional cloudy German-style wheat beer that balances tart and slightly salty flavors with a soft malt background, according to the company. The beer features Oregon-grown Marionberries as well as dried hibiscus flowers for a tart, floral profile with clove and coriander flavors to round it out, the company says. The last new beer is Hefeweizen, which is purposefully cloudy in appearance due to live yeast in suspension. It features wheat and biscuit flavors complemented by subtle citrus and faint spice notes, it says. Shaddock IPA is available in limited quantities on draft and in six-packs and 12-packs at select retailers. Marionberry Hibiscus Gose is available on draft, in 22-ounce bottles, and in four-packs of 12-ounce bottles. Hefeweizen is available on draft, in 22-ounce bottles, and in six-packs, 12-packs, 24-packs and 5-liter mini-kegs nationwide.