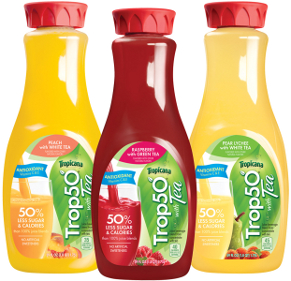 PepsiCo, Purchase, N.Y., will introduce new varieties to its low-calorie Tropicana Trop50 brand next month, including a Red Orange variety and a line of juice-and-tea combinations.

Trop50 Red Orange blends orange juice with red oranges and offers 50 percent less sugar and calories than 100 percent juice blends as well as no artificial sweeteners, the company says. An 8-ounce serving contains 50 calories and supplies a full day’s worth of vitamin C and is a good source of potassium, it adds.

The new Trop50 with Tea juice drinks will be available in Peach with White Tea, Raspberry with Green Tea and Pear Lychee with White Tea varieties. Each juice-and-tea variety contains antioxidants in the form of vitamins C and E, and like the other Trop50 products, features 50 percent less sugar and calories than 100 percent juice blends as well as no artificial sweeteners. An 8-ounce serving of the Trop50 with Tea juice drinks ranges between 35 and 45 calories. The suggested retail price for 59-ounce bottles will be $3.96; the Peach with White Tea and Raspberry with Green Tea varieties in the Trop50 with Tea line also will be available in 12-ounce bottles for $1.69 each.

"Trop50 is one of the most successful new product launches in the last five years,” said Kate Keller, Trop50 director of marketing, in a statement. “It's clear that we're easing the tension for consumers who love fruit juice but also are sugar and calorie conscious. These leading-edge flavors give people even more ways to enjoy refreshing fruit juice goodness throughout the day."

To support the new launches, PepsiCo will air commercials extending the humorous "Girlfriends" advertising campaign starring three-time Emmy nominee and Tony Award-winner Jane Krakowski. In the Trop50 Red Orange spot, Krakowski sings the praises of the new taste experience to her friends, waking her neighbors with a lively rendition of "I'm Walking on Sunshine." The Trop50 with Tea spot features Krakowski in a daydream with Gilles Marini, who played Luc Laurent on the TV show "Brothers & Sisters" and finished in second-place on season eight of "Dancing With the Stars." They engage in a seductive dance, but Krakowski reveals that her true desire is for something exotic and refreshingly different, like juice with tea.

PepsiCo also will launch a marketing campaign for Propel Zero featuring “Dancing With the Stars” performer Maksim Chmerkovskiy. On April 29, Chmerkovskiy will host the Propel Zero Just Dance Off, which is a live tournament using the popular Ubisoft game “Just Dance 3.” The tournament will take place at the El Capitan Theater in Hollywood from 2 to 5 p.m. and is open to the public. Dance kiosks will be set up throughout the event space for attendees to compete or enjoy watching the performances. Players can secure a spot in the Propel Zero Just Dance Off on a first-come, first-serve basis. The three finalists with the top “Just Dance 3” game scores will then enter the ultimate showdown: dancing with Chmerkovskiy and competing for prizes and a year's supply of Propel Zero.

The company also announced a partnership between Pepsi Max and Cleveland Cavaliers' point guard Kyrie Irving through the 2012-2013 season. Some of the marketing plans for Irving include branded videos, extensive social media integration and retail activation. In celebration of the partnership, Irving will take over the Pepsi Max Instagram account (@PepsiMAX) on April 25, giving fans a behind-the-scenes look at the last home game of his rookie season. In addition, Irving will host a live question-and-answer session May 3 via the @PepsiMAX Twitter account to talk with fans about his rookie season.