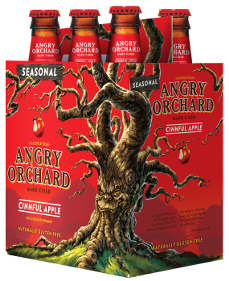 The Boston Beer Co. introduced Angry Orchard Cinnful Apple hard cider for the fall and winter seasons. The new cider features a sweet, slightly tart apple flavor with the aroma of cinnamon spice, the company says. Although the rest of the Angry Orchard portfolio sources apples from Europe, Angry Orchard Cinnful Apple is the first made with American apples from Washington state. Containing 5 percent alcohol by volume, the cider is available in six-packs for a suggested retail price between $7.99 and $9.99. It also is available as part of a 12-pack with three other Angry Orchard cider styles for a suggested retail price between $14.99 and $17.99.