Following its acquisition by C&C Group, Hornsby’s Cider received an updated brand image to capture its 15-year-old brand essence while helping it stand out from 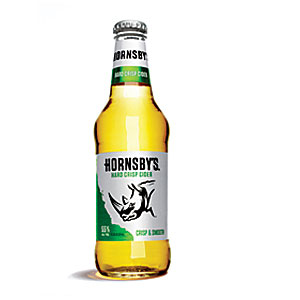 other brands in the category, the company says. Design firm Blue Marlin created the idea of Hornsby’s new “The Outcider” identity to break down barriers between beer and cider drinkers and help the budding hard cider category become more mainstream, it says. “The Outcider” represents the bravery, independence and fearlessness of being different, according to the brand. This new image is visually represented on the brand’s packaging, which now uses white instead of its signature navy blue to help it stand out on the shelf, it says. The design group also decided to elevate the Hornsby’s rhinoceros to brand icon status and redesign it to have a more contemporary, masculine look, it adds.