Xyience Xenergy, the official energy drink of the Ultimate Fighting Championship (UFC), launched its nationwide promotion “Do You Have the Power to Win?” this 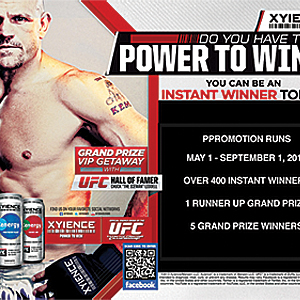 month. Fans 18 years of age and older have the chance to instantly win Xyience and UFC prize packages by texting a special keyword to the number found on point-of-sale displays at participating retailers. Hundreds of instant winners will receive prizes including Xyience and UFC apparel, UFC punching bags, DVDs of past UFC fights and pay-per-view gift cards for upcoming UFC fights, and more. In addition, Xyience will host four one-month promotions on its Facebook page through which fans can earn prizes by entering codes found on Xenergy packages. All text and Facebook entries also will be automatically entered to win a weekend in Las Vegas with UFC legend Chuck Liddell or UFC fighter Krzysztof Soszynski.

Xyience shows the ‘Xen’ of MMA