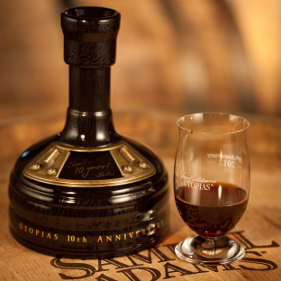 The Boston Beer Co. will launch its 2012 10th Anniversary Batch of Samuel Adams Utopias in November. Packaged in a brew-kettle-style decanter, the beer contains between 28 and 30 percent alcohol by volume. It consists of blends of beers that have been aged in a variety of wood barrels for as many as 19 years. This long aging process enhances the beer’s vanilla and maple notes, and its high alcohol content creates an aroma of ginger and cinnamon, the company says. Samuel Adams Utopias 10th Anniversary Batch is a limited-release, limited-distribution offering, with only 15,000 bottles being produced. One bottle has a suggested retail price of $160.