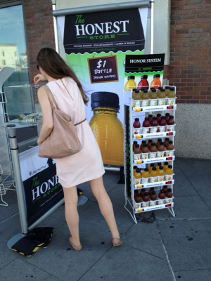 From Aug. 8-19, the company set up more than 50 unmanned pop-up kiosks in more than 30 cities across the country, with each location stocked full of Honest Tea and Honest Ade. Signage at the stands offered the beverages for $1 a bottle with payment based on the honor system, going into a clear box on-site. The outcomes were recorded using a customized digital tracking application by undercover observers nearby. Data collected for the National Honesty Index included geographic locations such as cities and iconic business districts; observable characteristics like gender and hair color; and groupings of people including baseball fans, comic book fans, beachgoers, people with kids and more.

"While the National Honesty Index measured consumer’s honesty in almost three times as many cities as last year, it was great to see that, by and large, people across the country are honest," said Peter Kaye, Honest Tea’s vice president of marketing, in a statement. "With the exception of the man who tried to steal our duct tape, it's inspiring to see these results are consistent with our efforts to be refreshingly honest in making our beverages with real, organic ingredients."

Honest Tea will match the money collected and donate it to City Year, an AmeriCorps program which unites young people of all backgrounds for a year of full-time service. The goal of the nonprofit is to build community by helping to turn around high-need schools and get at-risk students back on track.

“Since one purpose of our experiment is to highlight the level of trust in communities across our nation, we’re glad to donate the money collected from this year’s experiment to City Year, which helps make our communities stronger,” said Seth Goldman, president and TeaEO of Honest Tea, in a statement.

A full list of the measured cities and breakouts by specific geographical areas and baseball teams is below. The complete Honesty Index is available at nationalhonestyindex.com, where visitors can check out and compare the honesty statistics of more than 30 cities and 50 different groups of people and build customizable infographics, which are shareable across many social platforms.