In the foodservice channel, 46.8 percent of companies are in the quick-service restaurant business, according to the 2012 Chain Restaurant Report published by 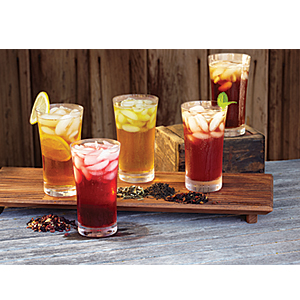 Chain Store Publishing Corp. The segmentation breaks down further with approximately 30 percent of the businesses specializing in casual dining, 9.2 percent in fine dining, 6.5 percent in fast casual, 5.5 percent in family restaurants and 1.7 percent operating in-store feeders, the report states. One segment, however, stands out above the rest.

“There’s certain things that go into defining a fast-casual [restaurant], but part of it is obviously better quality food and drink; part of it is the ambiance; part of it is the freshness of the ingredients and how things are made,” Henkes explains. “Beverage clearly plays a key role within fast casual because as consumers are going there for something a little better, a little different, they’re also looking for better, higher-quality, more unique drinks.”

The fast-casual segment has made an impact on consumers, but it also has affected other foodservice types. According to The NPD Group, Chicago, fast casual is the only restaurant segment that has continued to grow during current economic times, which has motivated chains in other restaurant segments to upgrade their menus and renovate their interior spaces for more modern and upscale looks.

Quick-service restaurants such as McDonald’s and Wendy’s have innovated with refreshing offerings, including sweet teas, smoothies and lemonades, Technomic’s Henkes notes. For instance, McDonald’s introduced the seasonal McCafé Cherry Berry Chiller in May. The drink is made to order with 100 percent fruit juice and natural flavors, the company says. Wendy’s introduced all-natural lemonade sweetened with cane sugar for the summer.

An increased variety of beverage offerings is one of the main drivers of traffic to restaurants, says Mike Ginley, partner at NextLevel Marketing, Westport, Conn. The other driver is value, he says.

“Operators can spark business with unique offerings that provide good value to their guests,” Ginley explains. “Fortunately, consumers do not define value as the cheapest offerings possible. Consumers define value as the best quality they can get for the best price, and they are very willing to pay more for better quality and better-tasting drinks.”

Fountain innovations are appealing to consumers who are continuing to seek increased selection and value, he says. The Coca-Cola Freestyle machine brings fountain selection and flavor variety to a new level. With more than 100 flavors available including the addition of Dr Pepper varieties, the interactive fountain machines are available in more than 4,200 locations, including fast-casual restaurants such as Moe’s Southwest Grill, Noodles & Co., Five Guys and Go Roma as well as quick-service restaurants such as Burger King and Wendy’s.

Multi-Flow Industries, a beverage concentrate provider, sells more cola and diet cola varieties than any other beverage; however, the company also offers zero-calorie and natural options for the foodservice channel. Late last year, it launched nourisH2O, which is a zero-calorie, vitamin-enhanced, fruit-flavored water. The company developed this product in response to the growing popularity of ready-to-drink enhanced waters as well as the need for a lower-cost alternative to fruit juices, says Owen Rothstein, director of product development for the Huntingdon Valley, Pa.-based company.

“There can be no dispute that the ‘natural’ trend is the single largest [trend] affecting food and beverages over the past several years,” Rothstein says. “With Fountainhead, we took the appeal of the traditional American soda fountain and combined it with the healthful sensibilities of the modern, socially aware consumer.”

However, Multi-Flow’s Rothstein has noticed a shift away from carbonated soft drinks (CSDs) and toward non-carbonated offerings such as lemonade and iced tea. Technomic’s Henkes agrees noting that although CSDs account for the largest volume in foodservice, CSD volume is flat or declining. He expects the fastest-growing non-alcohol beverages in the overall foodservice channel to be smoothies, frozen coffee drinks, iced tea, energy drinks and hot specialty coffee.

On the alcohol side, wine and spirits continue to grow at the expense of beer, NextLevel Marketing’s Ginley says. Within the beer category, mass domestic brands are steadily declining as consumers turn to craft and import beers, he adds.

To promote their beverage offerings, many foodservice operators have turned away from deep discounting and toward value pricing, Ginley says.

“Today, it isn’t all about how low can you go when it comes to price promotions,” he explains. “It is more about how much quality, flavor and innovation can you provide for fixed pricing at around $5 with trade-up options.”

Foodservice operators of all types are utilizing happy hour promotions, social and mobile deals, e-newsletters, contests and coupons to drive sales this summer, according to Technomic’s June 2012 Marketing Insights newsletter.

High-end restaurants also have bounced back within the last year partly because unemployment is low among high earners and also because many consumers go out to eat less often, but when they do go out, they might splurge on a better experience, Technomic’s Henkes explains. The fine dining segment was hit the hardest during the recession, and now it is achieving better numbers as recovery begins, NextLevel Marketing’s Ginley says.

Compared to last year, most foodservice segments are reporting better business trends this year, Ginley adds. Technomic’s Henkes predicts that the foodservice channel will grow approximately 4 percent this year in terms of spending.

“When you’re looking at the beverage category, being innovative or being forward thinking or trying to have a broad set of offerings that are on trend with the consumer is extremely important, not necessarily to get more people in the door, but to bolster check averages and to increase customer satisfaction to such that it’s going to have a long-term positive impact on your business,” he says. BI