For the 16th consecutive year, U.S. convenience stores (c-stores) have experienced record in-store sales in 2018, according to an April press release from the Alexandria, Va.-based National Association of Convenience Stores (NACS). Total sales surged 8.9 percent to $654.3 billion in sales, the association says.

Boston-based GasBuddy attributes much of beverage’s performance within the channel to impulse buys, noting that 65 percent of beverage purchases typically are unplanned before getting to the store, it said in a July press release. According to GasBuddy’s “2019 C-Store Beverage Study,” 56 percent of consumers in the 18-29 year-old age group said they are more inclined to get their beverages at a c-store versus a drug or grocery store, followed by the 30-44 age group at 53 percent, the press release continues.

“Today’s consumers — especially millennials — are buying more food on-the-go, including snacks, drinks and prepared meals,” said Frank Beard, convenience retail analyst at GasBuddy, in a statement. “Efficiency is paramount in today’s society, and convenience stores are providing the desired ease and choice of options for an evolving customer.”

Jeff Lenard, vice president of strategic industry initiatives at NACS, boils c-store performance down to one thing: immediate consumption. “[U]ltimately, convenience stores sell immediate consumption,” he says. “Eighty-three percent of all items purchased are consumed within the hour. If you are thirsty, you want something now. If you are hungry, you want food now ... and that 83 percent figure does not include gas.”

In fact, most consumers see c-stores as a go-to beverage destination, with 53 percent of them saying the primary reason they went inside a c-store was to purchase a beverage to consume right then, Lenard adds.

Gary Hemphill, managing editor of research at New York-based Beverage Marketing Corporation (BMC), also touts the immediate consumption characteristic of the channel. “It’s the optimal channel for immediate consumption beverages,” he explains. “Most beverage categories do well; [ready-to-drink] RTD coffees and energy drinks are two examples of categories that have a high percentage of their sales through that channel.”

Outside the traditional offerings

Convenience stores generally have lagged behind other channels in delivering healthier offerings, but it has caught up immensely driven by the demands and preferences of its customers, BMC’s Hemphill notes.

In turn, c-stores are adapting to consumers’ growing desires for healthier options and going beyond the traditional offerings, says Paul Weitzel, vice president of analytics at Winston-Salem, N.C.-based Inmar. “C-stores are no longer solely defined by tobacco, snacks, candy and beverage products,” he says. “In addition, new players will continue to redefine c-stores and cater to younger hip shoppers who plan less but still want better-for-you, fresher foods and beverages when they want them.”

NACS’ Lenard also notes the move toward healthier, fresher food and beverage offerings that go beyond the traditional options. “Convenience stores provide as many healthy options within an arm’s reach as any channel,” he says. “Stores have certainly seen an embrace of categories like bottled water and even newer items like kombucha.”

Expansions of fresh, better-for-you options in the assortment of products offered such as non-GMO, gluten free and antibiotic free are good examples of the channel adapting to the needs to today’s consumers, adds Matt McCourt, senior vice president of convenience and retail client services at Chicago-based Information Resources Inc. (IRI).

Recently, a lot of attention has been directed toward cannabidiol (CBD) products and rightfully so, McCourt says. Products containing CBD are making a big impact on the c-store channel in markets that have legalized it, he adds.

However, the explosion of new products like CBD and healthier, better-for-you beverage options can pose a challenge for the limited shelf space most c-stores have, Inmar’s Weitzel warns. “Store specific and localized assortments will become more common and require better analytics as beverage space will grow; it also will require better navigational signage in the store and in the sets themselves,” he explains.

Like the name of the channel suggests, consumers are there for convenience. “People are shopping for convenience, however they define it, whether it means 24-hour operations, proximity (93 percent of Americans say they are within 10 minutes of a convenience store), or a one-stop shopping experience (food, fuel, bathroom, snacks and drinks, all in one, small footprint),” NACS’ Lenard says.

As c-stores continue to see an influx of foot traffic, millennials and Gen Zers increasingly are utilizing the channel. “Millennials and Gen Zs are especially drawn to specific locations based on new and exciting offerings,” IRI’s McCourt says. “We are seeing a true blending of cultures and people shopping convenience stores. It’s really a true cross-section of America.”

Because of the demographics of the frequent c-store shopper — millennials and Gen Zers — retailers have had to adapt in order to catch the attention of these technology driven consumers. “[T]echnological advances] will redefine convenience,” Inmar’s Weitzel says. “For many consumers, ‘experience’ is becoming even more important than the actual products themselves. Experience will place an increasing role in defining convenience.”

However, making eCommerce profitable in a small-format environment will be a challenge, which is why partnerships with other suppliers, like Amazon, will be important, he says.

Retailers are partnering with UBER EATS, Door Dash and other delivery companies to expand their coverage and service, which is important to millennials and Gen Z consumers, IRI’s McCourt adds. 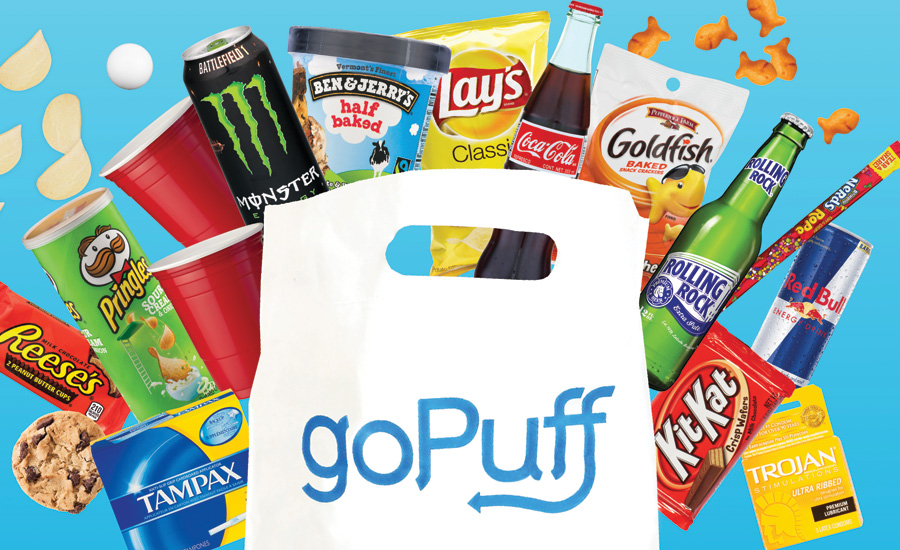 Founded in 2013 by two 20-year-old college students at Drexel University, goPuff was specifically designed to deliver consumers items they would find at convenience stores. (Image courtesy of goPuff)

Spearheading a new convenient delivery method is the mobile app goPuff. Founded in 2013 by two then 20-year-old college students at Drexel University, Philadelphia, goPuff specifically was designed to deliver consumers items they would find at convenience stores. The company built its own “goPuff” facility, enabling products to go straight from its facility to consumers with the push of a button.

Another way technology is helping grow convenience stores is through personalization. “C-store retailers that tap into their loyalty program data (FSP) and merge it with point-of-sale data are able to develop unique and tailored programs that help move the needle on a local level,” IRI’s McCourt says. “Frequent shopper data identifies the shopper, details of the sale and total basket, and tracks purchases over time. IRI research has consistently shown that retailers that integrate point-of-sale data with FSP data outgrow others by more than 4 percentage points.”

As for the future of the convenience store channel, experts note that continued success is likely. “We do not see convenience store channel growth slowing down,” McCourt says. “There is even greater potential to use data, insights and technology to grow the business even more. [IRI] recommends focusing attention on assortment, new items and enhancing food offerings. It’s also important to use a promotional piece like loyalty rewards to capture consumers.”

NACS’ Lenard adds that in order for c-stores to see a successful future, the key is to offer not just convenience but an experience that sets you apart from everyone else selling the same products. BI