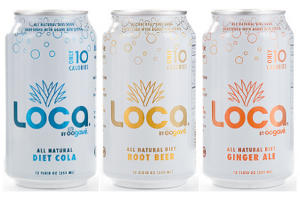 After launching a line of all-natural, certified organic sodas sweetened with agave nectar in 2001, Oogavé recently introduced a low-calorie line of naturally sweetened sodas called Loca. With 10 calories in every 12 ounces, Loca sodas are sweetened with a proprietary blend of agave nectar and stevia. The line is available in Cola, Root Beer and Ginger Ale flavors. A 12-ounce can retails between $0.89 and $0.99, and a six-pack of cans has a suggested retail price between $4.99 and $5.99.