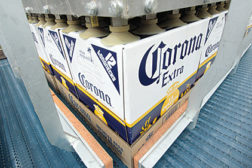 Grupo Modelo’s Compañia Cervecera de Coahuila S.A. de C.V. in Piedras Negras, Mexico, is one of the most automated plants in the global beer industry, yet it still retains the mastery of making beer that the company has had since its inception, thus preserving the traditional quality of its brands. The eighth and most recent plant in Grupo Modelo’s portfolio, the Compañia Cervecera de Coahuila has been called the “eighth wonder of Grupo Modelo.” Corona Extra production began March 28, 2010, in one of the most modern process plants in the world, which is a mark of pride for those who work at Grupo Modelo and in the Mexican village in general.