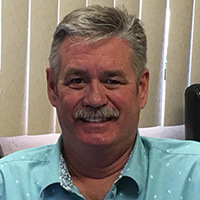 Scott Trotter is the V.P. of Operations for Canyon Distributing in Arizona with three facilities servicing smaller rural areas throughout the state. Growing up in beer Scott has been in the Operations side of beer distribution since 1979 working part time while still in school at his first distributor in Southern California, a 3.5mil case Coors / multiple brand house. Moving to a full time position in 1984, then promoting to a leadership role in 1985 as the Night Warehouse Supervisor for that same distributor He spent a total of over 16 years there before moving out of state.

Since then Scott has changed distributors a couple times staying within the MillerCoors brands moving up in responsibility and position along the way managing and consulting for facilities of 20mil cases and more. Specializing in organizational structure and efficiencies Scott has helped many distributors across the country make improvements by sharing best practices he has learned and developed over his 40-year career in beer.

Scott is a committed family man to wife Lynn of nearly 30 years. Together they have raised three great kids two of which have successful careers in beverage distribution as well. He is also an avid motorcycle enthusiast riding daily rain or shine and is frequently asked when running in to old friends and associates “Did you ride your bike here today” always responding, “Yes of course it’s always a beautiful day to ride”.