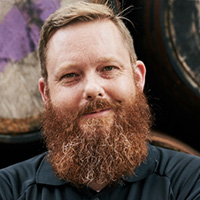 Peter Wiens leads the brewing team at Guinness Open Gate Brewery in Baltimore as Brewmaster of the iconic Irish brewery’s U.S.-based operation. Prior to that, Peter worked as senior director, brewery operations, East Coast at Stone Brewing Company’s Richmond, Virginia facility. He also spent 12 years working across brewing operations, process improvement, quality management and brewing research for Anheuser-Busch. He has a BA in Fermentation Science from University of California at Davis. Peter’s a virtuoso of every aspect of brewing, from creating beers to running a big brewery with lots of moving parts.