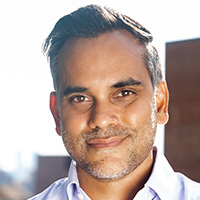 Amit Patel is a seasoned digital executive with 20+ years of leadership experience developing and implementing new media strategy and digital products for entertainment and e-commerce companies. As a Senior Vice President at Drizly, Amit oversees the ad monetization business and third-party partnerships with alcohol suppliers and leading consumer brands. Since joining Drizly in 2021, he's developed new strategic approaches for the company - putting a focus on scale, efficiency and value across monetization and partnerships. He previously spent two years at NBCUniversal, where he led distribution and strategic partnerships for Peacock and negotiated deals with innovative tech partners like Google, Apple, XBOX, Roku and American Express. Prior, Amit led the product and partnerships team at Amazon - overseeing the growth of Amazon Prime - as well as managed AT&T's joint venture with The Chernin Group and launched DIRECTV’s first over-the-top subscription streaming service. Early in his career he served in several product and business development roles for Western Digital and Sony Pictures Entertainment.