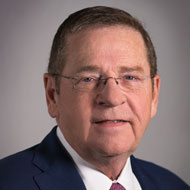 Thomas J. Harrington was appointed as our Chief Executive Officer effective as of the beginning of fiscal 2019. Prior to this appointment, Mr. Harrington served as the Chief Executive Officer of our DS Services business unit upon our acquisition of DS Services in December 2014 and was appointed President Route Based Services in July 2016. Prior to the acquisition, Mr. Harrington served in various roles with DS Services from 2004 to 2014, including Chief Executive Officer, President, Chief Operating Officer, West Division President, and Senior Vice President, Central Division. Prior to joining DS Services, Mr. Harrington served in various roles with Coca-Cola Enterprises, Inc. including Vice President and General Manager of Coca-Cola Enterprises New York and Chicago divisions. He also served in various sales and marketing roles with Pepperidge Farm from 1979 to 1985. Mr. Harrington previously served as a member of the board of directors of the National Automatic Merchandising Association, the International Bottled Water Association and the Water Quality Association.