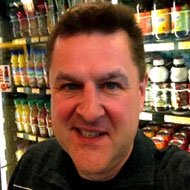 Neil began his career in marketing with Snapple, becoming Brand Director during the brand’s growth in the late 1990s. In the 2000’s Neil became VP of Strategy at Cadbury Schweppes Americas Beverages – (now Dr Pepper Snapple) where he led an extensive strategic agenda that included the acquisition of Nantucket Nectars, Yoo hoo and Orangina, the roll up of Snapple’s key distributors and Cadbury’s participation strategy in Non-Carbonated Beverages.
Between 2009 and 2011, Neil operated Foods, Fluids and Beyond, a consultancy that specialized in developing innovation brands like Runa Tea. In 2012 Neil returned to corporate life for a short time with Hershey in 2011 as Director of Global Innovation.
In 2013, Neil joined CEO Ken Uptain at Essentia Water. Over the following three years they have transformed the brand from it’s natural niche into one of the fastest growing, most dynamic brands in Premium Water. Essentia has authored a ground-breaking rehydration study, transitioned the brand into a mainstream Direct-Store-Delivery network, and built availability in over 35,000 locations across the USA, reaching $51M at retail in 2016 (Source IRI+SPINS we 12/25/16).